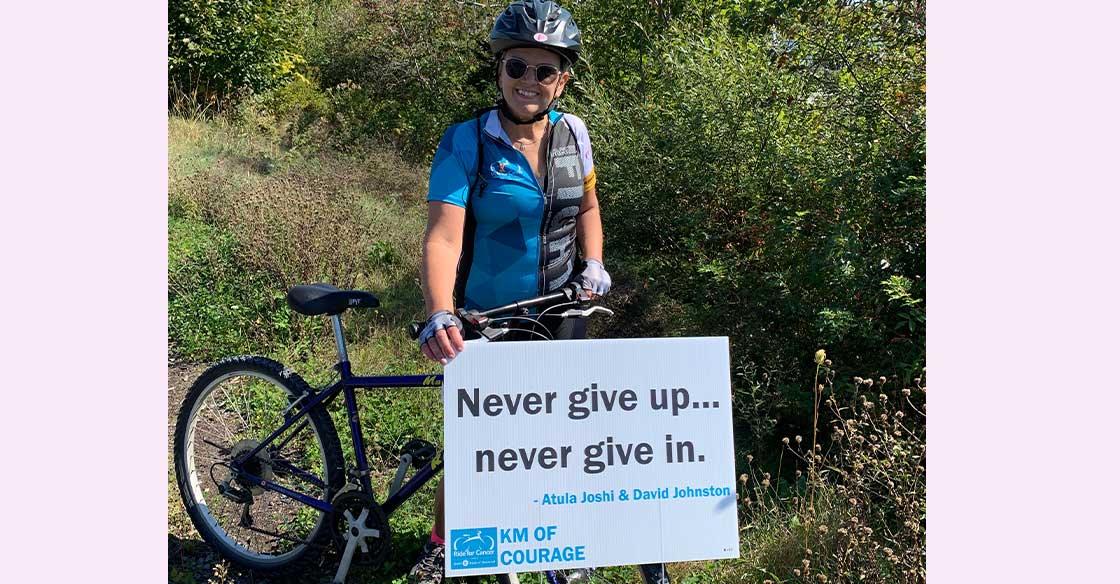 Leslie Keevill, a six-year breast cancer survivor, is hopeful breast seed brachytherapy will improve the quality of life for many women. Shown here at the 2019 Ride for Cancer powered by BMO Bank of Montreal, Leslie has participated in the event for three years and is proud to raise money for cancer care here at home. Contributed

Using radioactive seeds that are smaller than a grain of rice, breast seed brachytherapy is a relatively new treatment for breast cancer patients. This treatment will not only allow patients to spend less time away from home receiving treatment, but also ensure the QEII Health Sciences Centre remains a centre of excellence in cancer care for Atlantic Canadians.

In the coming months, Dr. Jean-Philippe Pignol, the QEII’s head of radiation oncology, will offer breast seed brachytherapy to some early-stage breast cancer patients, all thanks to QEII Foundation donors, and event participants and supporters of Ride for Cancer powered by BMO Bank of Montreal.

“We want to make a patient’s challenging journey simpler and faster, making them feel better and more reassured about their outcome in the future,” says Dr. Pignol.

The innovative form of radiation therapy treatment is delivered in a single procedure that lasts less than one hour.

During the procedure done under light sedation and local freezing, Dr. Pignol places between 10 and 20 needles into the breast, where a lump was previously removed. Each needle is loaded with about four tiny titanium radioactive seeds, which are then placed into the breast. The seeds release soft radiation over a period of two months, explains Dr. Pignol.

“The seed is the most convenient treatment,” he says. “It is the less risky of treatments for the patient in term of exposure to radiation.”

Radiation in the seeds is delivered to a small area of the breast and precisely pinpointed, so as not to leak into other parts of the body. The limited radiation exposure reduces the patient’s risk of lung cancer and other diseases and allows for greater preservation of the breast, he says.

At the end of two months, the seeds remain in the breast, but they are without radiation. They are so small that the patient cannot feel them. Patients are followed up as usual with routine mammograms.

For Pauline Sykes, the treatment meant that instead of facing three to five weeks of daily radiation treatment and long trips from her home in Toronto to the city’s cancer care centre, she made one trip to the hospital and was back home the same day as the procedure.

In 2006, after her surgeon removed a lump in Pauline’s right breast, Dr. Pignol implanted 62 seeds into her breast at Toronto’s Sunnybrook Health Sciences Centre while she was awake listening to Rod Stewart songs on her headphones.

“It was the simplest procedure and the safest procedure I’ve ever had in my life,” says Pauline. “I had an amazing experience from the beginning to the end.”

By receiving this more convenient, shorter form of treatment, Pauline felt less stress and could begin her healing journey faster. She was back to work a few days after the treatment.

“Cancer patients say, ‘I want to go back to my normal life as soon as possible,’” says Dr. Pignol. “That’s where we can help.”

“We know it is efficient. We know it is safe,” says Dr. Pignol, who has published long-term data on patient outcomes.

Dr. Pignol envisions performing the procedure on between 30 and 50 patients with early-stage breast cancer in the first year at the QEII and increasing the number in subsequent years.

QEII Foundation donors, event participants and supporters played a major role in securing this leading treatment for the QEII.

The sixth annual Ride for Cancer powered by BMO Bank of Montreal took place on Oct. 3, 2020. Hosted by the QEII Foundation, the event introduced new safety protocols amid COVID-19 to keep riders and the community safe. The event raised more than $1.26 million net, and counting, to advance cancer care locally and deliver new treatments. A portion of those proceeds will help bring breast seed brachytherapy treatment to the QEII.

Among this year’s riders was Leslie Keevill, a six-year breast cancer survivor.

For the third year, Leslie and her husband rode alongside a community of riders to raise money for cancer care here at home.

Having undergone a mastectomy, chemotherapy and 25 rounds of radiation, Leslie is hopeful breast seed brachytherapy will improve the quality of life for many women.

“To have this kind of treatment available, for anyone who qualifies, will make a huge difference,” she says. “I think it is incredible.”

Ensuring the QEII has the best treatment options available to women is essential. In 2020, an estimated 27,400 women in Canada will be diagnosed with breast cancer, which represents 25 per cent of all new cancer cases in women this year. With good diagnoses and the continual improvement of treatment and care, Dr. Pignol says there is much reason for hope.