Building a foundation for success and support 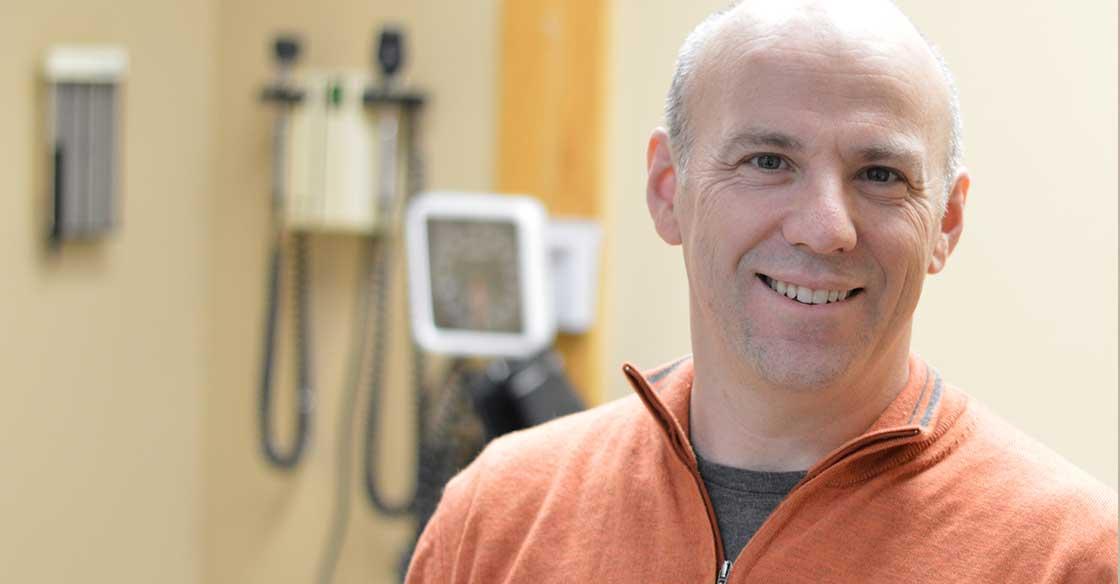 QEII endocrinologist Dr. Thomas Ransom and his peers are leading the local portion of a national study aimed at early intervention for diabetes and creating a foundation for the individual’s long-term success. – QEII Foundation

A newspaper ad and a phone call sent a Nova Scotia man’s life in a fresh, healthy direction. And at 48 years old, Andrew F. of Cole Harbour says the redirect came at a pivotal time.

Andrew had just been dealt a surprise Type 2 diabetes diagnosis and was left unsure exactly what his prognosis meant for the long-term and which habits needed changing. He at once worked to change his diet and exercised a bit, but with minor impact. He ultimately required medication to bring down his sugars.

“I tried, but with limited knowledge on what to be doing, it didn’t work out all that well,” says Andrew. “I kept at it and was just hoping for the best and then it all turned around for me.”

Andrew spotted a newspaper ad for a national study, sponsored by the Population Health Research Institute (PHRI), being conducted locally by endocrinologist Dr. Thomas Ransom and his peers at the QEII Health Sciences Centre. Dr. Ransom’s research group are the top recruiting site Canada-wide and are among eight university and community-based research sites from Alberta to Nova Scotia.

The national study, approved by the Nova Scotia Health’s Research Ethics Board, is looking for participants — diagnosed with Type 2 diabetes in the past five years, 30 to 80 years old and not currently on insulin as part of their treatment.

Along with standard diabetes medications, all participants receive lifestyle interventions focused on coaching, diet and exercise, and their sugars are watched closely. The study hopes to show that early aggressive sugar lowering can rest and ultimately reset the pancreas so that medications can be pulled back. Ideally, the rested pancreas can function normally or keep sugars down for a prolonged period afterwards.

“It didn’t take me long to see the benefits of participating,” says Andrew. “It’s nice to have a support system filled with experts; they are encouraging, supportive and they’re just as driven to see me succeed as I am.”

Dr. Ransom says the extra attention and level of personalized diet and nutrition training participants receive is meant to create the foundation for the individual’s long-term success. It is also part of a movement in health care to focus on early intervention — or what Dr. Ransom calls “move upstream” — with the goal of reducing dialysis, amputation and blindness that can occur as Type 2 diabetes progresses.

The “dream results,” Dr. Ransom says, would be to show that an aggressive regimen can slow down or stop the progression of the disease and the burden of diabetic complications on patients.

People with Type 2 diabetes have insulin resistance which means that their insulin can’t bring down their sugars. It is the high sugars that causes the damage. Strategies to bring down sugars include medications to help improve insulin sensitivity or to give extra insulin.

In 2017, 2.3 million Canadians were reported being diagnosed with diabetes.

In summer 2020, Andrew was in week 28 of the 16-month study and confident that his lifestyle has changed for the better and permanently.

With the pandemic sending much of the workforce home, Andrew’s job also transitioned to a home office. But the timing, he says, could not have been better. Being home and quarantined allowed Andrew to focus on his fitness, take extended walks with his fiancée and their Rottweiler companion, Slayter, and make eating better and exercising a daily priority. He has lost more than 35 pounds to date and says he now realizes how unhealthy he was previously.

“I thought I felt good before, but I realize now that I was just used to feeling that way,” says Andrew. “A healthy diet and plenty of exercise is all your body wants. All the health gurus talk about it and it’s true. Through healthy eating and exercise, I’ve changed how my body is reacting to insulin.”

For Andrew, living with Type 2 diabetes has turned from a scary, uncertain thing to a condition that he can manage through diet, exercise and the knowledge, training and support he’s learning as a study participant.

Dr. Ransom hopes that with such an approach, including early aggressive medical management and behavioural changes, more patients like Andrew will not only be able to come off their diabetes medication but stay off for a prolonged period of time with less complications.

For more information or to participate in the study, please contact Blaine Gallant, research co-ordinator, at blaine.gallant@nshealth.ca or 902-473-3299.