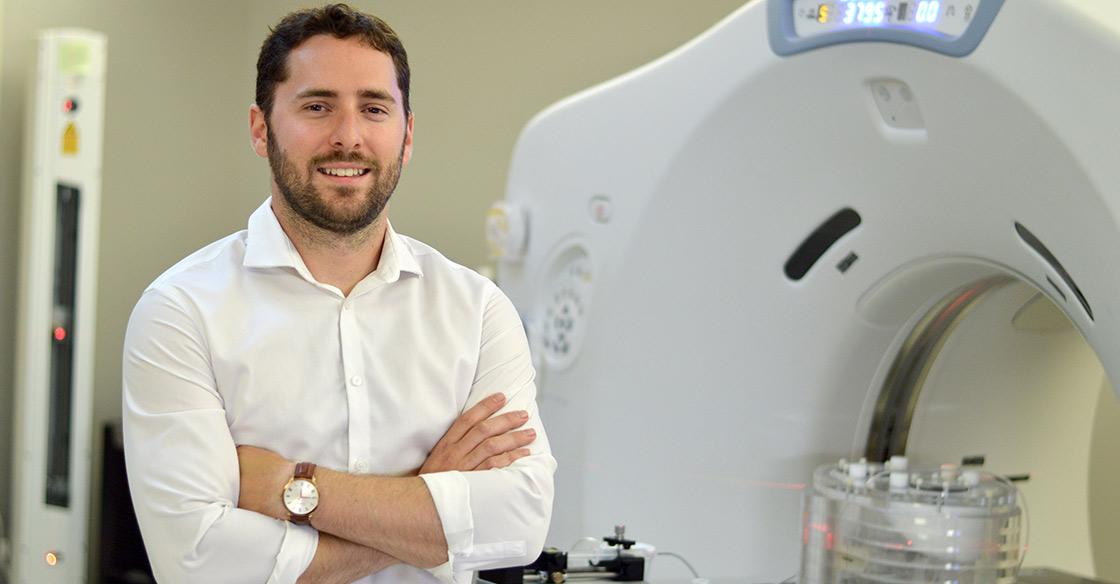 Courtney Henry, medical physics PhD candidate at Dalhousie University and a trainee in the Cancer Research Program with the Beatrice Hunter Cancer Research Institute, is working on new solutions to advance treatments for liver cancer.

A traditional method of treating liver cancer, external beam radiation therapy, has always been challenging as the radiation beam has to pass through healthy tissue in order to reach the tumour. In an effort to target the tumour without irradiating healthy tissue, a process called radioembolization was first conceived in the 1960s.

In this process, tiny radioactive particles are delivered directly to the tumour through a catheter. These particles, called microspheres, emit high-energy electrons that damage the DNA strands of tumour cells and, destroy them.

Even as radioembolization has gained traction as a popular therapy, certain challenges remain. For example, there is currently no imaging method to confirm the tumour dose during the administration of the microspheres.

“Commercially available microspheres are essentially invisible to X-rays once embedded in the tumours’ blood vessels,” explains Courtney Henry, a medical physics PhD candidate at Dalhousie University and a trainee in the Cancer Research Program of the Beatrice Hunter Cancer Research Institute.

“This is a problem because we want to make sure the microspheres are going where they provide the best therapy and that we’re getting uniform coverage of the tumour while minimizing exposure of healthy liver tissue — or even other organs — to radiation.”

The second challenge concerns the quality of most post-procedure scans.

“This makes it hard to get a precise value of exactly what dose the tumour received,” Courtney says.

In an effort to improve current treatments, Courtney is collaborating with Halifax-based ABK Biomedical to develop advanced microspheres for use in radioembolization.

“Because the CT has better spatial resolution compared to the existing standard, we can get a much better picture of the dose,” Courtney says. This level of precision is critical in determining what Courtney describes as a “dose-response relationship.”

“Essentially, this is how much dose we have to deliver to the tumour to see a measurable change in tumour volume,” he says.

According to Courtney, ABK Biomedical’s development of these microspheres is “just the first step.” ABK is continuing its development work on this investigational device with the goal of ultimately seeking a marketing approval in the future.

“The next step is to provide a real-time visualization of that dose as the microspheres are administered. By ensuring uniform coverage of the tumour, we can avoid having to repeat the procedure multiple times.”

In a recently published paper, Courtney detailed some promising initial results. “I deposited hundreds of thousands of microspheres into human tissue-equivalent material, put that under the microscope and then counted the particles.”

A CT image of that model was then collected to yield the sought-after intensity value.

“If you know the number of microspheres and the radioactivity per microsphere, then you can identify the actual activity administered to the tumour. This is the first step in performing precise dose calculations,” he notes.

The next logical step was to use the same methodology on a real organ or tissue. Collaboration between ABK Biomedical and Courtney’s team resulted in pre-clinical studies being performed on a pig kidney.

“After administering microspheres to the kidney and performing an X-ray scan, I was able to apply the same methodology and extract a higher-quality dose distribution than with regular scans.”

For people living with liver cancer, the potential future benefits are plentiful.

“From a patient’s perspective, the advantage of radioembolization is in its ability to deliver a radiation dose locally and accurately target the tumour without irradiating nearby healthy tissue,” Courtney says.

Carla Ross, the executive director of the Beatrice Hunter Cancer Research Institute, says this innovation is being fuelled by generous funding from various partners, including the QEII Foundation. “We’re able to leverage this money to sponsor upwards of 35 to 40 students at a time.”

Carla notes that the resources provided are particularly valuable. “We’re eternally grateful to the QEII Foundation for their support. They provide us with $50,000 a year, which directly supports our cancer research training program.”

With this support, trainees from across Atlantic Canada and a wide variety of disciplines get a chance to collaborate.

“We have medical physicists, immunologists, behavioural scientists and microbiologists all working towards this common goal of cancer care, prevention, cure and treatment,” says Carla.

It’s a sentiment echoed by Courtney. “As a researcher, getting perspectives from other researchers across a variety of fields is really helpful.”

Thanks to advances in technology, solid financial backing and cross-departmental synergy, the future for this research looks bright.

And Carla is quick to point out the hope provided to patients.

“When they come in, it reminds the trainees of why they’re doing their research.”

Courtney agrees. “To see a patient come in with these problems we’re trying to solve, really motivates you to put the time into achieving your research goals.”