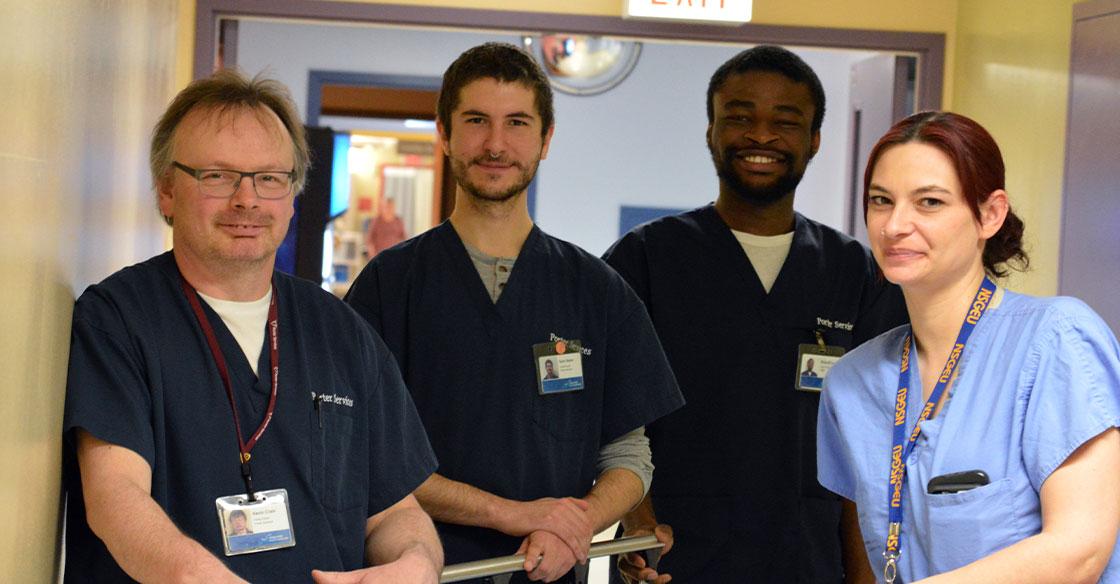 Kevin Crain speeds into the porters’ break room in the basement of the QEII’s Camp Hill Veterans Memorial Building to take a breath for a few minutes. It’s a rare sight: a quick check of his phone’s pedometer shows he’s already hit the 10,000-step mark and he’s only three hours into his shift.

He averages 22,000 steps a day, or about 16 kilometres, and that’s up and down stairs, speeding along halls and quickly walking between 10 buildings of the QEII Health Science Centre in Halifax. “I don’t go home at night and go for a jog,” he says with a smile.

He and the roughly 100 other porters are the blood pumping through the QEII’s veins. About 72 will be working on any given day. They take blood samples to the lab for testing, deliver organs for transplants and transfer medical specimens. But perhaps the most important work they do is helping patients get from one spot to the next, either walking alongside them for stability and guidance, or pushing their bed to the right place. Small talk makes a big difference.

“We’re not moving boxes – we have people,” Kevin says. “You might have the same conversation 30 times a day, but that person might have only had that conversation once. People going to the operating room are nervous. You make small talk with them. I don’t know how many times I’ve had people say, ‘Oh! Are we here already?’ They don’t have time to be nervous.”

Kevin started when he was 24 and didn’t know what he wanted to do next in life. “I just came here and stayed,” he said. “I found my niche. I’m a people person and in this job, I make 30 new friends every day.”

He spent this morning picking up patient charts and carrying them to health records. He then helped patients get to the operating room. It’s a tough job, as some people are “sick of being sick,” or just received devastating news from their doctor.

“Obviously everything isn’t peachy keen, because if it was, they wouldn’t be here,” Kevin says. “You just try and make their stay as good as it can be.”

Tanya Godley, an assistant manager for Porter Services, says the porters use smartphones as a modern pager. A call comes in and a dispatcher sends a porter. “It could be a chart or specimen delivery, a call to the lab or pharmacy, or transferring patients to a clinic,” she says.

Brant Johnson supervises Porter Services and has done the job himself for more than two decades. He knows that many patients are stuck staring at the ceiling most of the day. “Just that five-minute interaction of making sure that person knows you care about their well-being while they’re in here; to me that’s one of the most important parts of this job,” he says. “At some point in time, we’re either all going to be in here, or we will have loved ones in here.”

Brant says working with very sick people takes its toll on the porters. And some patients don’t leave, but die in the hospital. The porters accompany them on their last journey, too.

The porters work – and walk – through sunshine, through rain storms and through blizzards. They develop a mental map of the quickest route between any two hospital sites. If you’re lost in the QEII, ask a porter for directions.

Kevin says the best day is almost always the same one: discharge day. Walking with patients as they take those last steps back into their regular life brings joy to them – and to the porters.

“Everybody’s glad to go. Nobody wants to see us again,” he laughs.