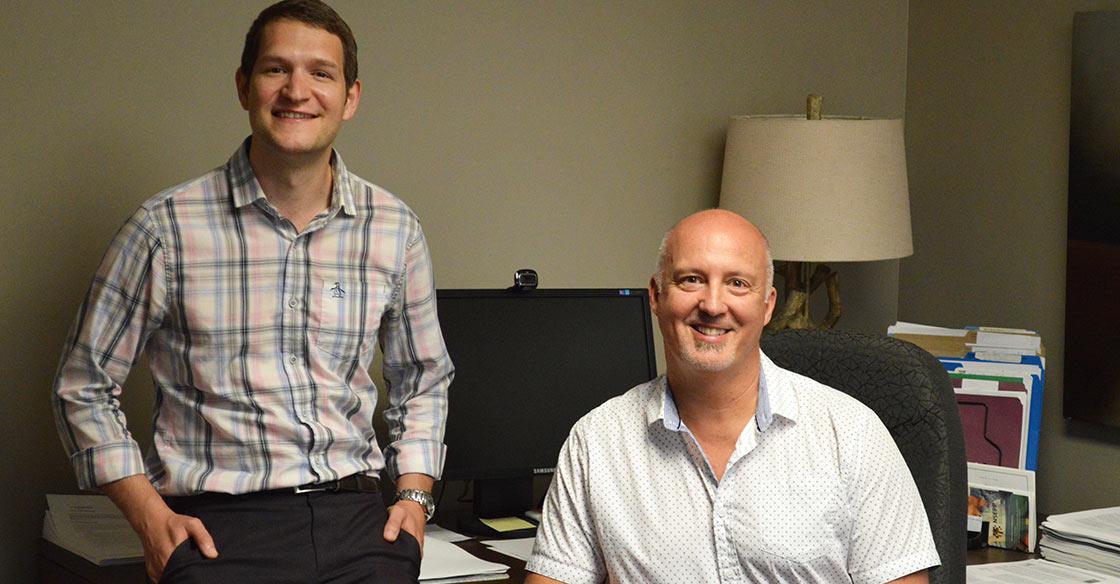 Noah Epstein (left) is a peer support worker with the Nova Scotia Early Psychosis Program (NSEPP) at the QEII. With help from a QEII Foundation TRIC grant, Dr. Phil Tibbo (right), director of the NSEPP, led the research to confirm the positive impact of a peer support program for people experiencing a psychotic disorder.

Since the mid-1990s, the Nova Scotia Early Psychosis Program (NSEPP) at the QEII Health Sciences Centre has been identifying and treating psychotic disorders. As director Dr. Phil Tibbo explains, the clinic’s motto has always been “the sooner, the better.”

“Our mandate is making sure that individuals who are experiencing a psychotic disorder get intensive treatment early, so that they have the best possible outcomes,” he explains.

Based on 20 years of national and global research, the program has consistently proven that early intervention services are optimal.

“Through integrated measurement-based care, we’ve always had a good idea of how patients are doing.”

“From the perspective of patients and families, the wellness is being maintained,” Dr. Tibbo says. “We see people getting back to school and work and getting on with their lives.”

QEII Foundation Translating Research Into Care (TRIC) grants have been instrumental in funding the program. The NSEPP has received two such grants, the first of which was to examine the use of peer support work in the transitions from an early psychosis program — NSEPP is standard for the first five years of illness — to community care.

According to Rachel Boehm, director of mental health and addictions for the Nova Scotia Health Authority’s Central Zone, this was a perfect opportunity to look at procedural improvements.

“There are different levels of care,” she says. “A certain intensive level might be appropriate at a certain point, but it wouldn’t be appropriate throughout a person’s entire life. There’s a period of risk for patients when they’re moving from one program to a less intensive program and they can feel abandoned.”

Listening to this concern inspired a particularly valuable initiative.

“When we brought the research results back, the resounding signal was that we needed a peer support worker program,” Dr. Tibbo says.

A second successful grant application gave Dr. Tibbo and his team the resources needed to develop a peer support program and then monitor the results. Enter Noah Epstein, one of three peer support workers trained and vetted for the project. As Noah explains, his motivation to join the team stems from “passion and compassion.”

“I know what it’s like to have psychosis myself. If there’s anything I can do to help others get out of that unfortunate state, then I’m happy to work at that.”

As someone who’s personally experienced the symptoms of psychosis, Noah’s perspective as a peer support worker is indispensible.

“I wanted to help people understand the state they’re in and help them work through it,” he says.

For Noah, a typical day involves setting up face-to-face meetings with peers. Small talk eventually segues into a discussion about mental health.

“I’ll ask them how’ve they’ve been doing lately, if they’ve been eating and sleeping well and if they’ve had any symptoms. The point is not to interview them, but to share and relate my own personal experiences.”

Dr. Tibbo is quick to point out why Noah is such a valuable asset.

“When we initiated this, we had peer support workers in the HRM with depression, bipolar disorder and anxiety experience, but none with psychosis. As someone who’s had those experiences firsthand, Noah really resonates with his peers.”

According to Rachel, the financial support provided by the QEII Foundation has had far-reaching benefits.

“It’s really exciting that the QEII Foundation has supported this peer support program, which helps patients have smooth transitions, move on to another level of care without any gaps in service and really improve their outcome and recovery.”

It’s a sentiment echoed by Dr. Tibbo. “We want to make sure that the gains that we’ve worked on for the last five years are maintained.”

“The peers I’ve met said that it felt like a graduation from a successful run of early phase treatment. They felt like they could be open with us as peer supporters which, in turn, encouraged them to be more forthcoming with their psychiatrists and clinicians.”

With positive results and support from their administrative partners, the team was able to continue the peer support program after the TRIC grant-funded research ended.

“It’s great when the research funding has an immediate effect on how we deliver health services in Nova Scotia,” Rachel notes.

For Dr. Tibbo, the results are highly encouraging.

“In the past, the approach to psychosis and schizophrenia assumed that outcomes weren’t going to be great. Early intervention proves that isn’t the case and recovery is definitely possible.”

As for Noah, he’s now a self-confessed “believer.”