One giant leap for blood testing 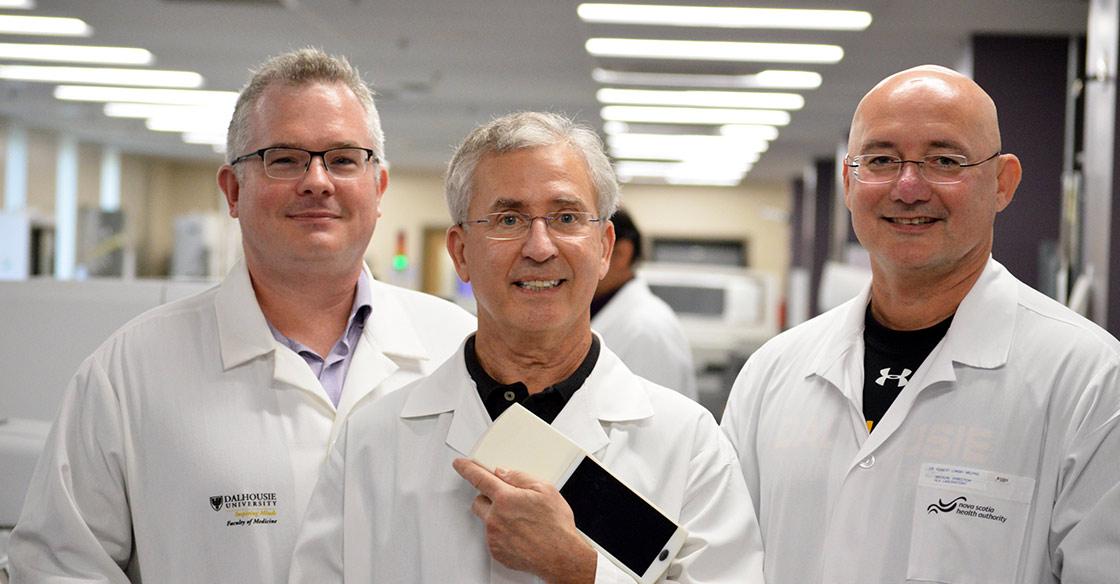 Dr. David Conrad (left), Dr. Alan Fine (centre) and Dr. Rob Liwski (right) show off the prototype of a portable blood testing device, a version of which is currently testing astronauts aboard the International Space Station.

New device truly out of this world

A Dalhousie University researcher has created a prototype of a device that could revolutionize how medical professionals generate and analyze blood tests.

Dr. Alan Fine, a professor of physiology, biophysics and biomedical engineering at Dalhousie University, carries the device in a small backpack. He shows it to his colleagues at the QEII Health Sciences Centre, Dr. Rob Liwski and Dr. David Conrad, who handle it in amazement.

The current method of blood testing relies on machines that take up most of a floor at the health centre. Dr. Fine’s device is the size of a chunky 1980s cellphone and will have a cost similar to a high-end smartphone.

Drs. Liwski and Conrad have played a vital role in helping Dr. Fine develop the device over the last decade, but this is the first time they’ve seen the 3D-printed prototype. Dr. Fine explains that it needs only 15 microlitres of blood, which it warms and mixes with chemicals for analysis before taking dozens of images to analyze the blood.

After just eight minutes, the onboard computer produces the results. Dr. Fine says it’s as easy as taking someone’s temperature. “The hope is that some serious medical conditions that might be overlooked could be identified much earlier.”

Dr. Conrad explains why that’s such a big deal. A patient who might be anemic sees their family doctor, who sends them for a complete blood count at a blood clinic. The patient goes there for the tests, which are then sent back to the hospital to be analyzed. The results are sent to the family doctor, who calls the patient back for another appointment. This process can take a week or longer.

But Dr. Fine’s device could do the same tests in less than 10 minutes on the spot. “This could be done by the receptionist, so by the time you’re seeing the physician, it’s already available,” Dr. Fine says.

He knows the device works when placed on a flat surface and is now studying it to see if it will work as a handheld device or in a vehicle that may vibrate and shake it. He does know it works in space because his company, Alentic Microscience, beat out competition from around the world when the Canadian Space Agency selected it to test astronauts aboard the International Space Station (ISS).

The device launched into space in April 2019 and will be aboard the ISS for at least five years.

Dr. Liwski sees huge potential for the small device in the hospital, too. “You have very sick patients in the hospital who have blood collected every day, multiple times a day. Each time you collect a couple of tubes of blood, they risk becoming anemic,” Dr. Liwski says. “This new device would be a great solution for them.”

Dr. Fine says the device will be piloted in Nova Scotia in 2020. After that, he sees vast potential to use the portable and quick device in rural areas, remote hospitals and in the military. It could help diagnose anemia, some blood cancers and some infections, such as malaria.

“It all sounds like science fiction, but it ended up in space,” says Dr. Liwski with a laugh.