Guardians of the operating room 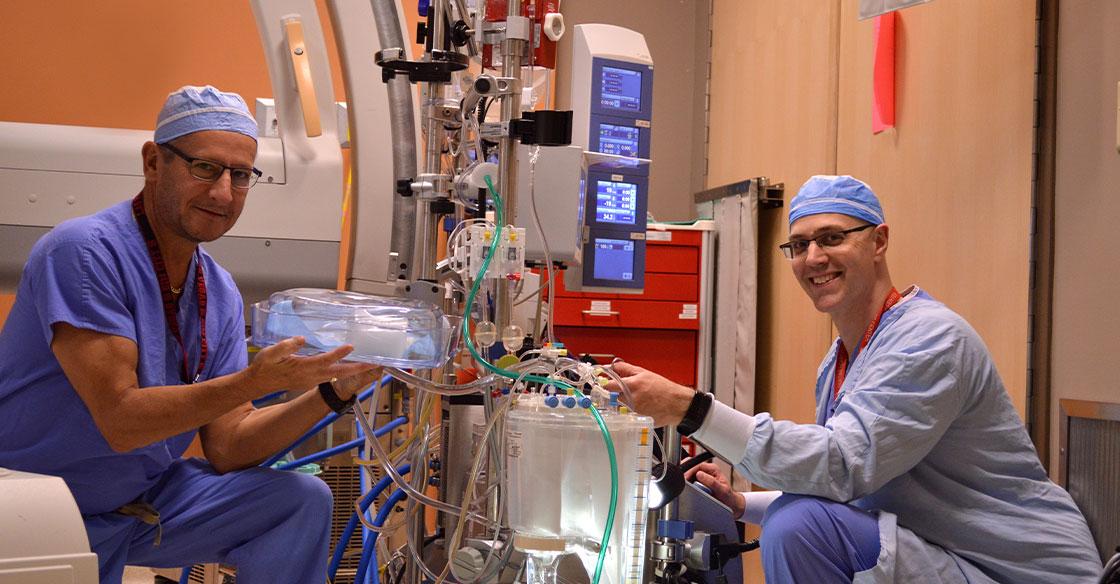 Up to five times a day, a staff perfusionist like Roger Stanzel stands behind a control panel, busy with dials and digits, pumps and cords. Every second is occupied as he systematically glances at every monitor and every variable in the operating room, looking for signs of trouble.

When the stakes are as high as they are during cardiac surgery, even the slightest non-verbal communication is intensely monitored.

“You’re reading what the surgeon is doing and you’re in team mode,” says Roger. “I can tell based on the way the surgeon is standing or how they move what they’re going to need. Part of my job is trying to anticipate and get ahead of things.”

Roger isn’t just tracking respiratory data or monitoring heart activity for the surgeon. Roger is a clinical cardiovascular perfusionist and he’s in full control of patient physiology during heart surgery.

Perfusionists take over the heart and lung functions of the patient and ultimately keep them alive throughout surgery. They operate cardiopulmonary bypass, also known as a heart-lung machine, which maintains the circulation of blood and oxygen through the body. A still heart is required for a multitude of cardiac surgeries including bypass grafts, replacing or repairing valves, fixing holes and heart transplants.

“A perfusionist has more of a 30,000-foot view of things, so our role is to help guide the surgeon,” Roger explains. “Once the heart-lung machine is up and running, we’re checking levels and making sure everything is operating as it should. It’s very hands-on and very detailed.”

At the QEII Health Sciences Centre alone, five cardiac surgeries are performed each day, both emergencies and planned operations. Each surgery requires a perfusionist. A unique profession, there are only about 300 perfusionists across Canada with 14 employed at the QEII, two of which are on call at all times. As the largest tertiary care centre in Atlantic Canada, the QEII is the only hospital performing heart transplants and insertions of long-term mechanical heart support (ventricular assist devices).

Dr. Edgar Chedrawy, the head of cardiac surgery at the QEII, says the collaborative dynamic in the operating room is the “ultimate team sport.”

“I don’t think there’s any other surgical specialty that really counts on the team as much as we do and I’m a firm believer it’s not just everyone doing their job. The team is more than the sum of the parts and this team makes it happen for us,” Dr. Chedrawy says. “There’s a lot of mutual respect and admiration for what they do.”

Adam Gillis, the QEII’s manager for anesthesia and perfusion services, says perfusion is not widely understood or discussed as much as traditional surgical, nursing and anesthesia roles.

“The heart-lung machine is a very intense and intimidating machine,” Adam says. “It takes a wealth of knowledge and competency to do this profession. These men and women are in complete control of the heart and the lungs during these operations and they have to react quickly to emergency situations. They work closely with surgery, anesthesia and nursing, making them an integral part of the care team.”

As Canadians live longer, medical teams at the QEII are adjusting to operating on and treating more elderly patients who are living with two or more chronic diseases or comorbidities.

“We’re getting to the point where at age 70, we’re doing a very invasive surgery,” Roger says. “It’s a lot, but this patient population does do well.”

The average age for a cardiac surgery requiring perfusion is around 74.

“Compared to 20 years ago, patients on average are living longer but they tend to be sicker,” Dr. Chedrawy says. “There is more diabetes, more obesity and more renal failure and that makes the demands of our work even more challenging.”

“The QEII’s perfusion team have really kept up with that demand and that complexity. And that’s a testament to how they’ve evolved, and keep evolving, as a profession.”