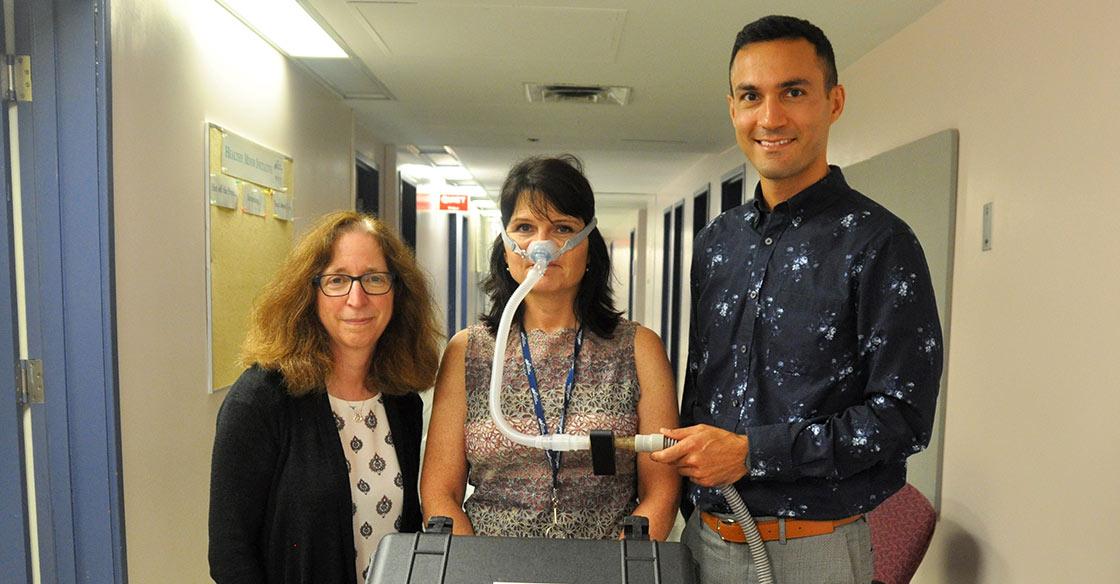 Getting a good night’s sleep is top priority for Dr. Hamed Hanafi.

The Halifax biomedical engineer, researcher and entrepreneur is working to ensure people can sleep better with his new medical technology, which aims to predict and prevent the breathing obstructions that cause obstructive sleep apnea patients to wake up and lose sleep.

The hardware is being tested in an observational study at the QEII Health Sciences Centre that has paired Dr. Hanafi with QEII respirologist and clinical director of the Sleep Disorders Program Dr. Debra Morrison. Dr. Morrison has recruited a small number of the sleep clinic’s sleep apnea patients to test the technology during a sleep study.

It is early days, but both are hopeful the small piece of technology will mean big changes with minimal added hardware.

“People have tried to predict apneas, but with sensors that add hardware on the patient. We don’t want to add more sensors, so we’re trying to do it with the sensors available on the machine,” says Dr. Hanafi.

Dr. Hanafi’s medical technology is called a cMAP — a Continuous Management of Airway Pressure — and is a small plastic sensor on the CPAP’s oxygen tube that personalizes airflow for each CPAP user. In the future and with potential partnerships with one of CPAP manufacturers, installing cMAP software would be sufficient in predicting and preventing apneas.

While CPAP machines are currently the disease’s main treatment, Dr. Morrison says they may cause discomfort, resulting in 30 to 50 per cent of patients not using their machines. And not using the machines when sleeping means patients are facing untreated obstructive sleep apnea, which results in airway closures lasting from 10 seconds to two minutes that can happen hundreds of times a night.

People with obstructions then wake up and have fragmented sleep, which Dr. Morrison says keeps them from feeling refreshed and alert the next day. She says it can also mean more health repercussions.

“Patients with sleep apnea also have a higher risk of accidents and can face various medical implications, like high blood pressure, stroke or heart disease,” she says.

When Dr. Hanafi asked if airflow management was the culprit, Dr. Morrison confirmed patient complaints were often around either too much or too little airflow pressure. So, Dr. Hanafi and his team created the cMAP, which will collect data from the study to write an algorithm that learns to predict breathing obstructions and can prevent them by adjusting airflow as obstructions happen.

“When obstructions happen, these machines are reactive and take about 10 to 20 seconds to react to them and to eliminate them,” says Dr. Hanafi.

The observational study and technology it is testing are unique to the QEII and stem from pioneering work Dr. Hanafi completed during his post-doctoral research in the faculty of engineering and Rowe School of Business at Dalhousie University under Dr. David Roach and Dr. Michael Schmidt, who helped him develop the cMAP’s predictive element.

The first round of study data was collected in early August 2019 and Dr. Hanafi and Dr. Morrison are only just beginning to pour over the results.

The study will be followed by clinical trials and with an end goal of commercializing the cMAP. As the certification of a medical technology is a long process, other studies will be undertaken before Dr. Hanafi applies to organizations, including Health Canada, to approve the cMAP as an add-on hardware and software for CPAP machines.

The technology is also one Dr. Hanafi hopes could eventually be applied to other respiratory diseases, like COPD and asthma.

Because the study has only just started, Dr. Morrison says it’s too early to say how the cMAP is helping patients. Rather, she says it’s the patients themselves who are helping her and Dr. Hanafi as they provide data that will help them complete their work on the cMAP.

“If we’re correct that the feel of the pressure they experience and the prevention of the few events they are still having on a standard CPAP machine makes it more comfortable, we should see an improvement in adherence to CPAP,” says Dr. Morrison. “And these patients are helping us see if we can make that happen.”