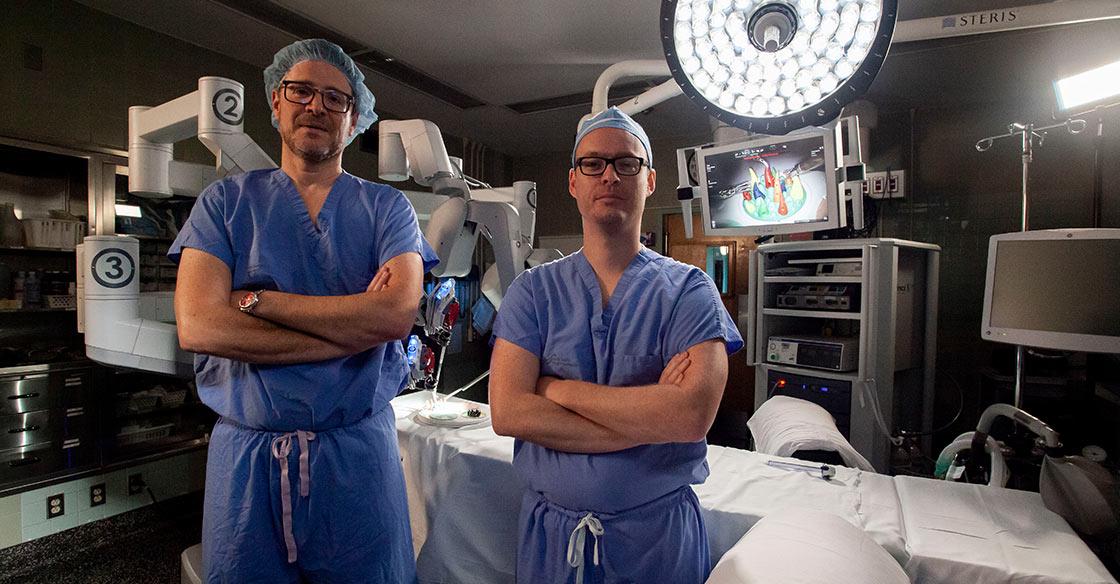 Dr. Ricardo Rendon (left) and Dr. Ross Mason (right) are part of the world-class QEII team that performed the first-ever robotic surgery in Atlantic Canada. Dr. Mason is one of four surgeons who were recently recruited to the QEII Health Sciences Centre thanks, in part, to surgical robotics technology, which will be entirely donor funded.- Darren Hubley

$8.1-million project to be entirely funded by QEII Foundation donors

Dr. Greg Bailly, chief of urology and co-chair of the new surgical robotics council at the QEII, says the cutting-edge technology lets healthcare teams perform certain cancer surgeries with greater precision than ever before via a robot.

He says many physicians — especially those who specialize in complex cancer surgeries — see robot-assisted surgery as the standard of care they need to work with. Therefore, access to this technology plays an integral role in bringing new, top talent to the QEII.

“When they’re looking for a job, they would like to use those skills because they’ve become part of the new wave of surgical techniques,” he says.

“Not only are we providing this technology for our patients, we’re actually exposing our trainees — both medical students and residents — to the most up-to-date, innovative technology that’s available. And that will inspire some of these trainees to pursue that sub-specialty within their surgical practices.”

The QEII competes with hospitals across North America and around the world to recruit these highly trained surgeons.

QEII urologist and cancer surgeon, Dr. Ross Mason, is a prime example. Born in New Glasgow, N.S., Dr. Mason did most of his medical training at Dalhousie University and the QEII. He then specialized in urologic oncology and robotic surgery as part of a two-year training fellowship at the Mayo Clinic in the United States.

“Robotic surgery has become such a mainstay of preventative-care surgery in the U.S. There are over 3,000 robots in the U.S.; there are 31 robots in Canada. When Canadian graduates are looking for sub-specialty training, the majority of them do go to the United States. And with several of the disciplines, they’re being trained heavily in robotic surgery,” Dr. Mason says.

“When we were trying to recruit him, it was important that we act quickly. And I was trying to assure him we will get the robot soon,” Dr. Bailly says. “And fortunately, it came within the first year of his practice here.”

Dr. Mason says the potential presence of a robot at the QEII — Atlantic Canada’s first — was a big factor in his decision to return to Nova Scotia.

Dr. Mason always hoped to return to Nova Scotia and plans to spend his career here.

Access to surgical robotics was a key driver behind that decision to return home and also played a significant role in the successful recruitment of three other new surgeons to the QEII, who will become a part of Atlantic Canada’s first-ever surgical robotics team.

Dr. Mason says the QEII’s surgical robot does nothing on its own. Instead, he sits in a comfortable chair, puts his face into a surgical console that resembles a virtual reality headset and operates the robot with controls. Robotic arms mounted with wristed surgical instruments are inserted into the patient via small incisions, along with a 3-D magnifying camera enabling increased range of motion, vision and control.

“The movements I make with my hands are translated into very fine movements inside the patient.”

Often these translated movements are so tiny and precise that they would not be possible with the human hand.

Ultimately, Dr. Bailly and Dr. Mason say the biggest benefit is to patients.

“At the time of surgery, we have less blood loss, less pain and an easier recovery with smaller incisions,” Dr. Mason says.

These patient benefits are a big reason why donors, like Donnie Clow and his family, are proud to support robot-assisted surgery at the QEII.

As volunteer chair of the QEII Foundation’s surgical robotics fundraising campaign and a prostate cancer survivor, Donnie leads a committee of community champions who are dedicated to funding the region’s first surgical robotics technology.

“This is a project that will be 100 per cent funded by the QEII Foundation and donors in the community,” says Donnie. “With just under $1 million left to raise of our $8.1-million goal, this is a prime example of how philanthropy transforms health care and unlocks treatment options that otherwise wouldn’t be available to healthcare teams and patients.”

To learn more about robot-assisted surgery or to donate today, visit QE2Robotics.ca.