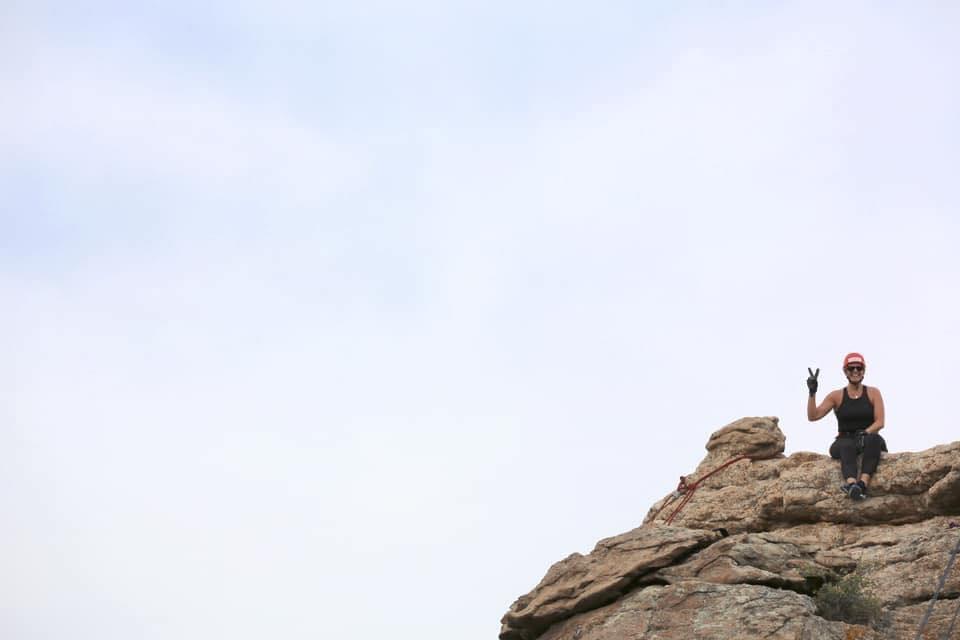 From half marathons and rock climbing to biking, soccer and hockey, the Halifax resident and Irving Oil employee says she’s happiest when she’s giving it her all.

While she always had a strong sense of adventure and a competitive spirit, her fierce love for sports and the great outdoors is, in fact, rooted in something much deeper.

In 2015, Sharon was diagnosed with neuroendocrine cancer; a golf-ball-sized tumour in her left lung. At just 42 years old, her life changed in that instant – but not in the way you’d expect.

“I immediately felt relief, which can seem strange when you’re talking about a cancer diagnosis,” says Sharon. “But for the first time in years, I finally had an answer.”

For more than seven years prior, Sharon battled often debilitating symptoms from an elusive, undiagnosed cancer. From recurring pneumonia and heart palpitations to diarrhea and skin rashes, her symptoms were often attributed to asthma, stress and food allergies.

When she finally received her neuroendocrine cancer diagnosis, Sharon then underwent major lung surgery to remove the tumour that was wreaking havoc within her body.

“I was supposed to lose my entire left lung, but thanks to my surgeon they were able to save my upper left lobe,” says Sharon. “That was such an incredible gift because by preserving more of my lung, it allowed me to live a more full and active lifestyle.”

According to Sharon, all of her symptoms immediately disappeared following surgery: “it was amazing how good I felt when I finally had the right answers and the right treatment.”

Part of Sharon’s healing included a new approach and outlook on life.

“I don’t know if my cancer will ever come back, so for me, it’s recognizing that right now I have the gift and privilege of being healthy,” says Sharon. “I want to maximize enjoying life and every moment while I can.”

In every year that has followed her cancer diagnosis, Sharon has committed to a new challenge or goal to work towards – whether it was conquering a mountain in Colorado, taking up a new sport like hockey, or cycling 2,000 kilometres for neuroendocrine cancer research on Dartmouth’s Salt Marsh Trail last summer.

Her focus for 2021 is to help bring a best-in-class detection tool to the QEII Health Sciences Centre; Atlantic Canada’s first gallium-68 DOTATATE tracer that will ensure earlier diagnoses for her fellow neuroendocrine cancer patients.

It’s a $200,000 initiative that will be entirely funded by the QEII Foundation and its generous donors.

About neuroendocrine cancer and gallium-68 DOTATATE

Neuroendocrine cancer is a hormonal cancer that can develop anywhere within the body with a wide range of symptoms; many of which mimic other illnesses. This makes it one of the most difficult cancers to detect, often taking five to seven years from a patient’s first symptoms to their official diagnosis. As a result, many patients already have stage IV cancer by the time they’re diagnosed.

According to Dr. Daniel Rayson, QEII head of medical oncology and Sharon’s oncologist, gallium-68 DOTATATE has “become the gold standard worldwide for not only diagnosing neuroendocrine tumours but selecting the best options to treat them and monitoring their response.”

For patients, like Sharon, who are undergoing surveillance post-treatment to ensure their cancer hasn’t returned or metastasized, a gallium-68 scan offers peace of mind.

“As a patient, every time you have a symptom, you panic and wonder, ‘is my cancer back?’ – so having a tool that can prove that it’s not is probably the biggest relief you can have,” says Sharon. “Alternatively, if it shows that cancer has returned, it allows your care team to immediately put the best treatment plan in place – saving precious time for patients.”

Despite its many benefits, gallium-68 DOTATATE remains out-of-reach to many patients across the country. Access is incredibly limited; available at only a few health centres and, in most cases, only as a clinical trial.

Local access to top-notch technology and care is always important, but a global pandemic only compounds that. In response, the QEII Foundation is on a $200,000 mission to bring this game-changing detection tool to the QEII Health Sciences Centre. By reaching its fundraising goal by March 31, it means that Atlantic Canadian patients living with known or suspected neuroendocrine cancer will have the best options available close to home, as early as spring 2021.

As one of the faces of the QEII Foundation’s fundraising campaign, Sharon is sharing her experience with the world: through videos, news articles, billboards and more.

It’s a responsibility she doesn’t take lightly or for granted.

“I was one of the lucky ones,” says Sharon. “Despite seven plus years of misdiagnoses, we caught my neuroendocrine cancer at stage II.”

In the five years since she’s been diagnosed, Sharon has lost five friends to neuroendocrine cancer. It’s a staggering stat that drives her to raise funds and awareness.

“There’s so many patients who are so sick because they’re diagnosed so late or at stage IV,” says Sharon. “So being a part of this is the least I can do to help them.”

Grateful for the team who stands behind her

The same way she approaches everything in life, Sharon’s embraced the QEII Foundation initiative “full throttle”.

As a fierce patient advocate for gallium-68 DOTATATE, she’s sharing her story but also personally fundraising for the cause.

She’s also inspiring her colleagues along the way.

Arthur, Sandra and Sarah Irving of Irving Oil, made a kind donation of $10,000 to honour their friend Sharon. The spirit of the gift recognizes Sharon's long, hard-fought personal battle. It also applauds the many ways she helps others with her kindness, care and support.

"We are happy to contribute to this undertaking in the acquisition of this important diagnostic tool," says Sandra Irving, "knowing what it means in helping doctors in their diagnoses and thus providing the best cancer care, and importantly what this means in terms of supporting friends, family, and fellow employees in their difficult cancer battle."

But their commitment doesn’t stop there. All donations made by her fellow employees will be matched dollar-for-dollar by Irving Oil through their employee giving program, Good Energy in Action.

When asked how it feels to be supported by the team at Irving Oil, Sharon says it’s difficult to hold back her emotions.

“It’s hard to put into words what their support means to me, personally,” says Sharon. “My entire team has been so encouraging and embracing – whether they’re personally donating or helping to spread awareness, it’ll ultimately help so many cancer patients in our region.”

According to Sharon, she feels honoured that her team is standing behind her so strongly, “bringing good energy and vital support to the communities where we live and work.”

So, if having her face on a billboard or the front page of the Chronicle Herald can lead to catching neuroendocrine cancer sooner or gives more patients a better fighting chance, it’s a goal she’ll happily undertake.