In challenging moments, extra gestures make a difference. When QEII care teams go that extra mile for patients and their families when they are at their most vulnerable, that sense of comfort is often cherished and remembered.

Judith Riddoch shares that when her late husband, Paul Riddoch, was diagnosed with an aggressive form of cancer, the excellent care provided by the QEII’s Department of Urology and particularly Dr. Greg Bailly, head of urology, was reassuring and played an enormous role in keeping Paul’s spirits up during what was a most difficult time.

“Paul had such a great, engaging smile,” Judith remembers. “He had a terrific, wry sense of humour and an enormously positive outlook even when faced with a diagnosis of terminal cancer. These strengths got him, and me, through our darkest hours.”

Judith and Paul first met at a meeting in Toronto while both working for the same medical device company. Judith was living in Toronto, and Paul was based in Calgary. “Music was a common bond, and Paul gave me an education in worldbeat music over voicemail,” Judith shares.

The couple lived in Calgary and spent summers in Lunenburg, Judith’s hometown, retiring there in 2015. “Paul really fell in love with Lunenburg and was in a bigger rush to retire here than I was,” she says.

“I remember that summer, he wasn’t feeling great,” says Judith. “He thought he had a UTI but his symptoms kept getting worse.”

Paul ended up at the QEII’s Halifax Infirmary and after many tests, he was diagnosed with a large undifferentiated sarcoma in his pelvis, a rare type of cancer.

In early September that year, Paul underwent a long, difficult surgery combining the expertise of the QEII’s Dr. Carmen Giacomantonio, general surgery, and Dr. Bailly. “We felt so lucky to have been under the care of these two extraordinary surgeons,” Judith shares.

“Dr. Bailly was always available to help navigate Paul’s symptoms and to answer our panicked questions, so we didn’t have to be rushing in and out of emergency. There was exceptional continuity of care coupled with compassion — a remarkable combination.”

Judith and Paul were so touched by the care that Paul received that, after his passing, Judith asked for memorial donations in Paul’s obituary to support the QEII’s Department of Urology, in gratitude to the urology team and to Dr. Bailly.

Dr. Bailly and the urology team recently celebrated the arrival of the QEII’s first surgical robot, that’s already changing the lives of people living with prostate, gynecological, kidney, and ear, nose and throat (ENT) cancers. The $8.1-million initiative was 100 per cent funded by QEII Foundation donors.

The donations given in Paul’s memory will be used to advance care even further by helping to purchase extra equipment to enable the establishment of Atlantic Canada’s first-ever laser prostatectomy program. This surgery will provide an additional option for men with enlarged prostates, offering safer, more effective outcomes and shorter lengths of stays compared to some traditional surgical techniques.

“Paul’s visits to the operating room were an opportunity for him to ask questions about the equipment we were using, reflecting on his own career,” says Dr. Bailly. “He was always eager to acknowledge how health care in Nova Scotia must embrace the changing times of technology and innovation.

“Paul spent his career in the surgical device industry, working with many surgeons at various hospitals around the country, so the choice of connecting Paul and Judith to this particular project, where their donations would help establish a new program which supports surgical innovation through the QEII, is fitting,” shares Dr. Bailly.

Judith hopes that this equipment will honour the QEII’s Department of Urology and help improve the lives of future urology patients from across the province.

“As specialized care, the QEII’s Department of Urology is a service that helps people not just in the city but all across Nova Scotia,” says Judith. “The compassion and attention provided by the urology team and Dr. Bailly really made all the difference to us. We’re so glad we chose this care area to contribute to.”

While Paul and Judith have expressed their gratitude for the support they felt from their medical team throughout their journey, Dr. Bailly also acknowledges that he was directly impacted by Paul’s own approach to managing his diagnosis and treatment.

“Paul’s diagnosis came as a sudden shock to their lives, an unfortunately all- too-common scenario,” says Dr. Bailly. “But throughout his treatment, Paul focused on the ‘good in life’, the many wonderful experiences he had, and his love for his wife, Judith, and family.”

To learn more about remembering a loved one with a gift in their memory, visit QE2Foundation.ca/Memory. 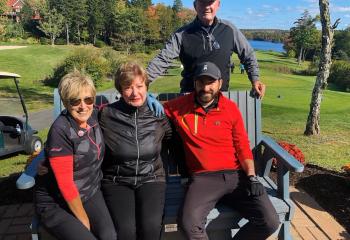