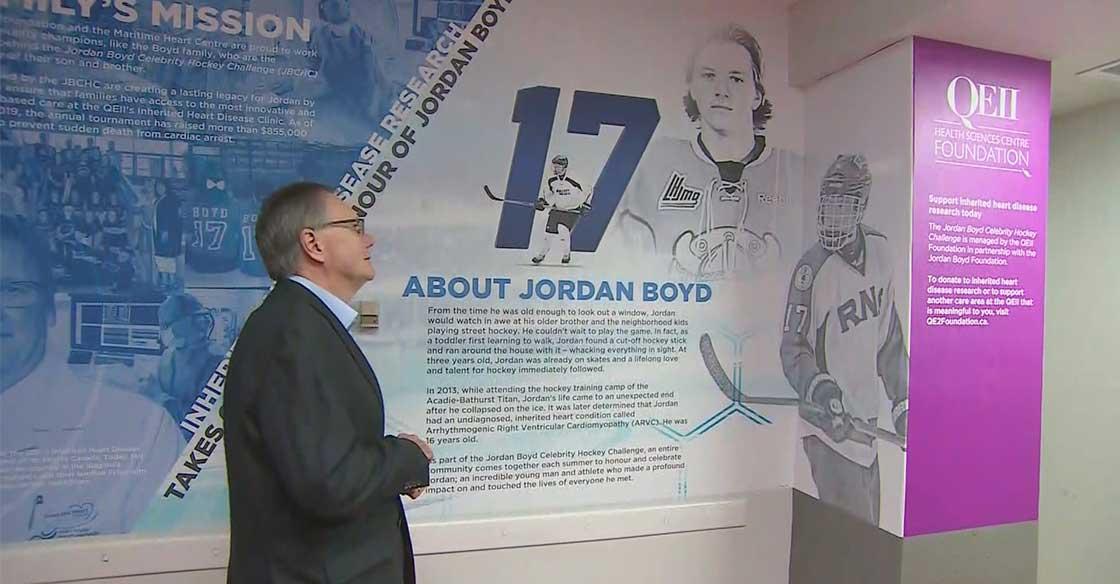 Caption: Stephen Boyd looks at a mural of his son, which was unveiled at the QEII's Inherited  Heart Disease Clinic in 2019.

The family of a young Nova Scotia hockey player who died of a rare heart condition has raised more than $1 million to fund inherited heart disease research at the QEII Health Sciences Centre.

Jordan Boyd was just 16 years old and a promising athlete when he collapsed on the ice in August 2013 while attending training camp for the Acadie-Bathurst Titan of the Quebec Major Junior Hockey League.

His condition wasn’t diagnosed until after his death, when it was determined he had arrhythmogenic right ventricular cardiomyopathy, a rare inherited heart disease. Nova Scotia has the second highest incidence of the disease in Canada.

Since Boyd’s death, his family has been working hard to preserve his legacy.

“Over the past seven years, the Boyd family have organized a series of fundraisers including the annual Jordan Celebrity Hockey Challenge and yesterday’s Jordan Boyd Celebrity Golf Challenge to abide by COVID-19 protocols,” said a release from the QEII Foundation.

“Both events include local NHL players and the community who strive to make an impact in Jordan’s memory.”

The research the money is earmarked for aims to “help prevent sudden death from cardiac arrest,” the release said.

The money raised so far has helped improve player safety protocols in Quebec Major Junior Hockey League by making it mandatory that there be three staff members trained in CPR and AED.

In addition, the funding has helped create a full-time research nurse position for the QEII’s Inherited Heart Disease Clinic.