The Chronicle Herald: Not afraid to stand out: three students talk diversity in N.S. health care

Ahmed Esmat, left, born in Abu Dhabi, UAE to Egyptian parents, immigrated with his family to Nova Scotia as a child. Jocelyn Paul is in her first year of the clinical psychology PhD program at Dalhousie University and she is focusing on combining Western psychological therapies with Mi’kmaq and other Indigenous traditional healing practices. Nursing student Vanessa MacLennan noticed her classes lacked training for assessing and diagnosing skin conditions on different skin tones. As she works toward graduation, she's also working to change how health care workers are taught.

A male Arab nurse, an Indigenous psychologist and a Black nurse stand out, and it’s too bad they do. Diversity in Nova Scotia’s health care system is still a work in progress.

As the 2021 applications are rolling in, the QEII Foundation recently recognized three recipients of the Diversity in Health Care bursaries from 2020. These $1,000 bursaries are for students who are Black, Indigenous, people of colour, immigrants, LGBTQ+ and those living with physical, mental health or learning challenges.

But there’s so much more to these students’ stories than that: there is racism and obstacles, but also inspiration and courage.

The word “RACIST” was the only answer Joceyln Paul could write down on this test. Back in Grade 5, Jocelyn Paul was living in B.C., not long before her family moved to Nova Scotia at age 13. She has a very clear memory of that question on a test for a healthy-living class.

“The context was given that ‘your friend is an Indian who lives on reserve and has access to cheap cigarettes. Your friend wants to hang out with you on the reserve, what do you do?’ And you had to write a paragraph about what you were supposed to do.”

Paul remembers feeling stunned. Then one of her Indigenous friends wrote “RACIST” under the question and the rest of the Indigenous students in the class followed suit.

That was one of the worst, she said, but the racist incidents didn’t end when she moved to Nova Scotia.

“I noticed it in smaller ways like sometimes it was ignorance and my peers at school not really understanding what it means to be Indigenous, saying things like ‘oh you have blue eyes,’ those types of things.”

For a career, she wanted to do something like her dad, who was an Aboriginal relations officer in Membertou, but was interested in sociology and psychology. Now, Paul, 25, is going into the second year of the clinical psychology program at Dalhousie University, and she has big plans. She wants to combine clinical psychology with Mi’kmaq and other Indigenous healing practices and share it with other psychologists for practical use.

Dalhousie University students who have self-identified as Aboriginal and Indigenous, Mi’kmaq, African Nova Scotian, International students and 2SLGBTQ+ in the faculty of health. (Total: 2,935 students) 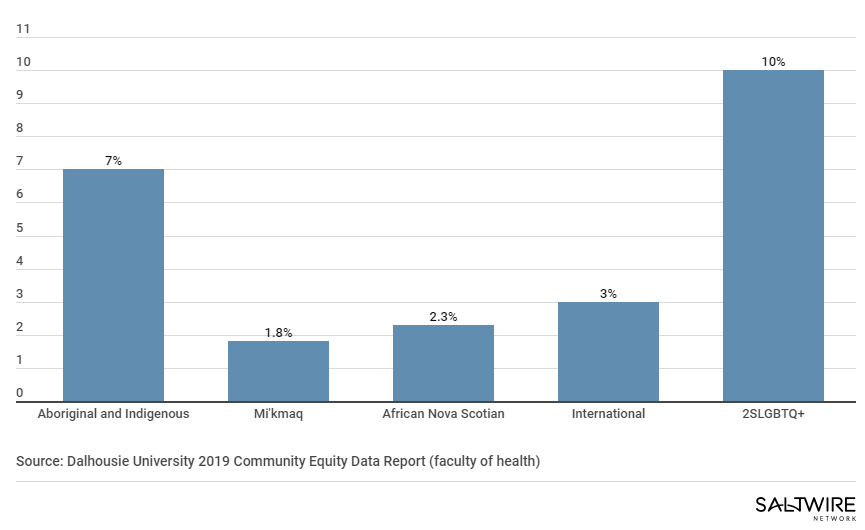 Racism and inaction from government and law enforcement is angering a lot of Indigenous people, Paul said, and it’s leading to further psychological health consequences. 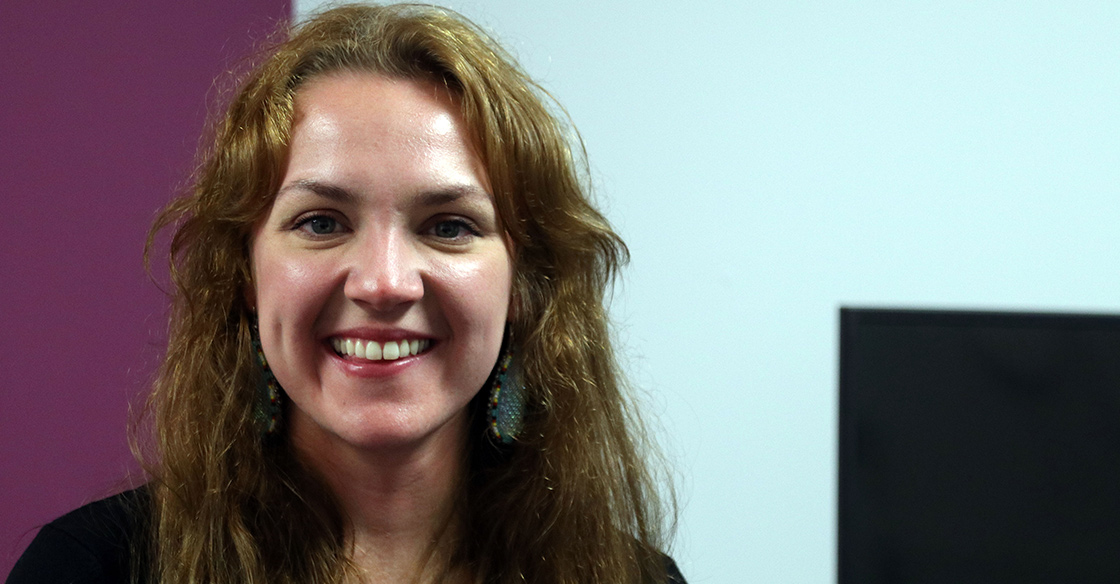 Jocelyn Paul is in her first year of the clinical psychology PhD program at Dalhousie University. She is focusing on combining Western psychological therapies with Mi’kmaq and other Indigenous traditional healing practices. - ERIC WYNNE/CHRONICLE HERALD

Paul has a lot on her shoulders but she’s ready.

“To me diversity has always been like a puzzle: the puzzle pieces fit together, all the different cultures … and they all sort of work best together. It sounds cheesy, but that’s always how I’ve pictured it.”

If Ahmed Esmat’s father hadn’t landed in the cardiac unit, Esmat would probably be studying engineering right now instead of nursing.

“I saw how the nurses were treating him and it was a rewarding feeling to help people, especially when they were so vulnerable,” Esmat said of the time in the hospital when he was just about to graduate high school. “For me personally, I saw the types of jobs my siblings were getting and … I wanted to work in a job where I was with people every day instead of working in an office.”

He said he was inspired by the nurses who took such good care not only of his father, but of their whole family too. 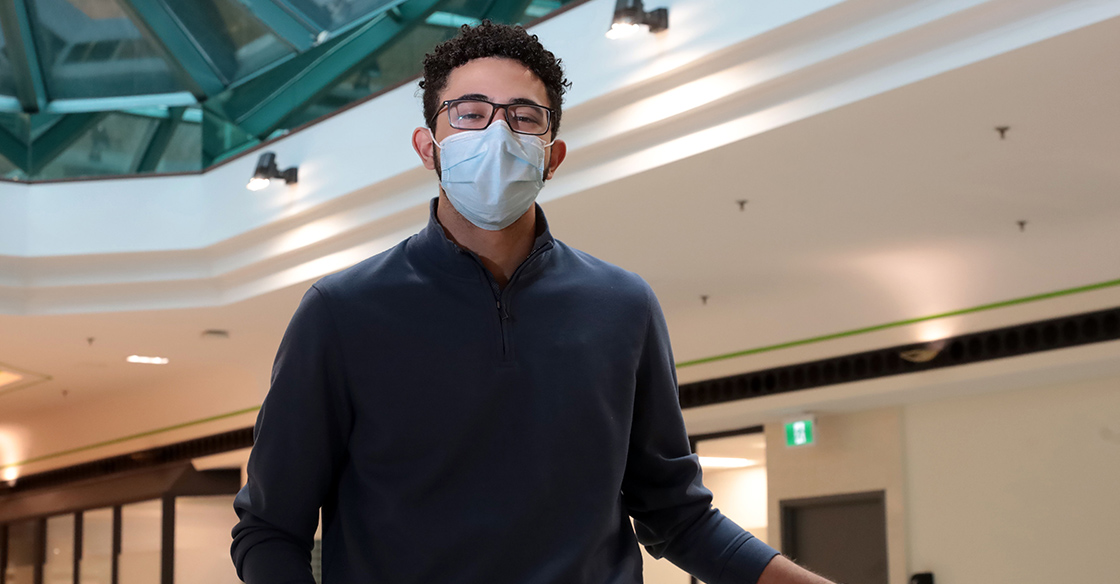 Ahmed Esmat, born in Abu Dhabi, U.A.E. to Egyptian parents, immigrated with his family to Nova Scotia as a child. After spending time in the cardiac ward at the QEII when his father was a patient, he was inspired to help people and is now in his second year of nursing. - ERIC WYNNE/CHRONICLE HERALD

Esmat was born in Abu Dhabi, UAE, after his family moved from their home in Cairo, Egypt. Then in 2008, when Esmat was six, they planned another big move, this time to Halifax for his older brother to attend university. Esmat’s three older siblings and father all studied engineering.

Starting school very young in the UAE, Esmat graduated high school at 16 and is now in his second year of nursing at 18 years old. He just finished a work placement in the same cardiac unit where his father stayed years ago.

“It’s very apparent as soon as you walk into any nursing classroom, there is a huge lack of guys, it’s very woman-dominated.”

And Arab male nurses are even more rare, he said.

“It’s a group that’s very under-represented and I think that comes with a lot of stigma in the Arab community towards male nurses, I would say. That’s something I want to change, like, represent them well.”

He said he wants to show people in the Arab community that people do this job and it’s a good thing.

“When you have someone like you in a program, or doing the things you never thought of doing, honestly it motivates you to do it too.”

Studying nursing during a pandemic has definitely been an experience and Esmat said he can’t wait until he graduates in another year to be on the front lines.

“I see a lot of communities, especially geriatric communities, getting affected really hard so it made me want to graduate earlier so I can jump in there and help out.”

Vanessa MacLennan’s mom insisted their doctor always be a woman of colour. It was a rule MacLennan, 26, didn’t think much of when growing up in Cole Harbour, and now her own baby daughter sees the same doctor.

“It’s important because the doctor may be able to relate to you more and also they may be more keen in diagnosing conditions that would appear differently on darker skin, which is not routine in any of the medical curricula I’ve had so far. Everything is based off of white skin.” 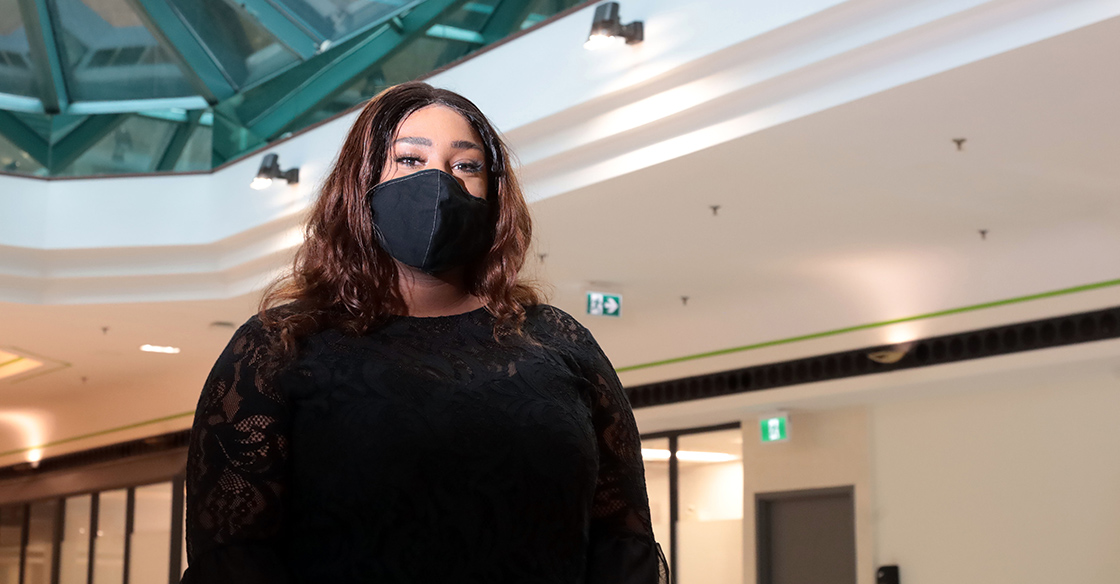 MacLennan said it seems to be the same in nursing instruction everywhere, not just at Dalhousie where she’s in her second year.

She’s trying to change that.

“It’s important whether you’re a white nurse or you’re a Black nurse, you’re comfortable assessing patients with different skin tones because that could affect the way you’re doing a nursing diagnosis,” she said.

“I think it should be already implemented into the curricula, that way when you’re in practice as a nurse, it’s not your first time encountering something like that.”

Click here to learn more about the Diversity in Health Care Bursary program and apply today!