Shining a spotlight on thyroid cancer 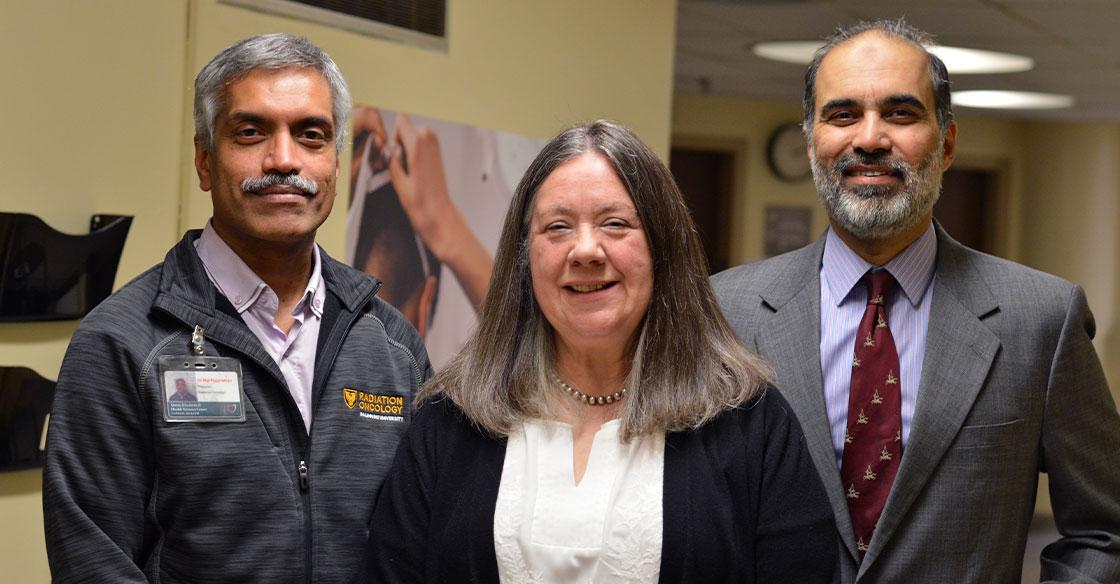 According to the Canadian Cancer Society, cases of thyroid cancer are on the rise. In fact, the incidences of this cancer have been steadily growing, says Dr. Mal Rajaraman, radiation oncologist at the QEII’s Interdisciplinary Thyroid Oncology Clinic (ITOC).

“There are about 900 cases a year of lung cancer in Nova Scotia compared to about 125 cases of thyroid cancer. It’s a smaller number but the rate of increase is rising more rapidly than any other cancer and it happens in relatively younger people,” he says. “Most cases are in people between 20 and 55, but it is the number one cancer in those 15 to 29.”

The thyroid is a small butterfly-shaped gland in your neck, measuring about four to six centimetres in diameter. While it may be small, the thyroid has a huge impact on your entire body. It produces thyroid hormone, which regulates metabolism, heartbeat, temperature, mood and a slew of other vital processes. So, when something goes awry, it can wreak havoc on your body.

Carol Dodds, a teacher and chair of the annual Blue Butterfly Evening fundraiser, knows this all too well. Carol was diagnosed with thyroid cancer in 2007, which is how she met Dr. Rajaraman. Like many thyroid cancer patients, Carol is a survivor and 11 years ago she became determined to raise awareness. Carol, along with a small committee of volunteers and in collaboration with the QEII Foundation, has been hosting the Blue Butterfly Evening since 2009.

This year’s event raised more than $31,000 net and counting, to support the development of the largest thyroid cancer database in the Maritimes, established 15 years ago.

“We are not just leaders in Atlantic Canada, we are leaders in Canada,” says Dr. Rajaraman, who is also the co-chair for the Canadian Network for Cancer of the Thyroid (CANNECT) — a collaborative network of researchers and clinicians committed to improving patient care, research and advocacy of thyroid cancer across the country.

Currently, CANNECT has 12 centres in eight provinces and they collect data on patients from across the country including 1,400 patients in Atlantic Canada, 3,000 in Winnipeg and another 3,000 in London, Ont., to create one large database that has become an invaluable resource.

The Blue Butterfly Evening and Carol are a big part of that.

“The event would not exist if it weren’t for Carol,” Dr. Rajaraman explains.

Because thyroid cancer is not a high-profile cancer, and it is very survivable in most cases, it tends to be left behind when it comes to awareness and funding. Dr. Rajaraman says this is why the yearly event is so crucial.

All of those funds stay within the community and go directly to helping Atlantic Canadians.

Donations and sponsorship for the event are on the rise and include contributions from community members, local businesses, large corporations and Saint Mary’s University, who has donated the venue space since the event began.

The Blue Butterfly Evening is much more than a fundraiser. It is one of the most unique wine tasting events in Atlantic Canada, according to Carol. And Dr. Rajaraman says the event and the ITOC team have become a family.

“It is really an acknowledgement for the healthcare team and patients, all of whom rarely get acknowledged for the vital work they do to bring awareness to the issue and improve care and treatment,” he adds.

The ITOC, which has quickly become a recognized centre for excellence in thyroid cancer care and treatment, includes Dr. Rajaraman; Dr. Ali Imran, an endocrinologist; Dr. Steve Burrell, a nuclear medicine physician and Dr. Jonathan Trites, a surgeon — each of whom are thyroid cancer clinical leads in their departments at the QEII.

The ITOC also includes dedicated nurses, pathologists and other clinicians that create a one-of-a-kind clinic where patients can see all of the key team members in one visit instead of having to travel numerous times for appointments over what can be many months.

Since it began, the Blue Butterfly Evening event has helped raise $383,257 net. Apart from the database, plans for the funds include improving the reliability of ultrasound reports for thyroid nodule evaluation, as well as several smaller projects designed to advance thyroid cancer treatment and care.