‘I feel so blessed’ 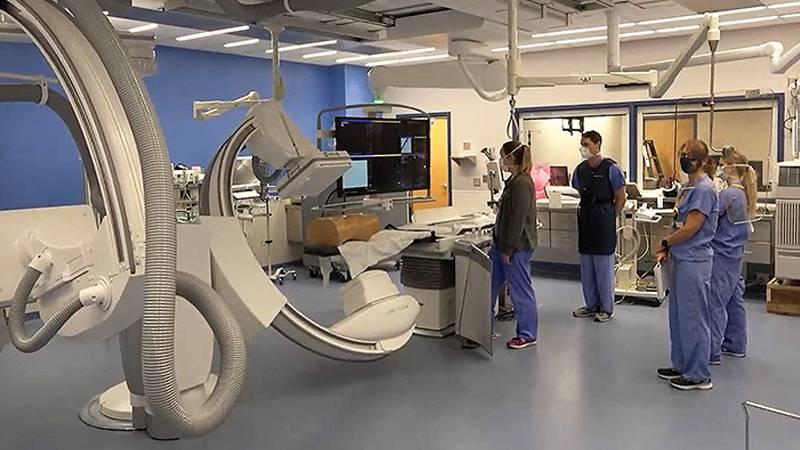 In December 2020, Atlantic Canada’s first AngioVac procedure for endocarditis was performed in the QEII’s new interventional radiology suites, partially funded by QEII Foundation donors, by a specialized team of about 15 people. – QEII Foundation

Ceilidh Mailman avoided open-heart surgery and was home for Christmas, thanks to a multidisciplinary team at the QEII Health Sciences Centre, who performed Atlantic Canada’s first AngioVac procedure on her right heart valve.

By undergoing the minimally invasive, image-guided procedure to treat endocarditis, a life-threatening inflammation of the inner lining of the heart’s chambers and valves, Ceilidh’s recovery time went from several months to several weeks — and she avoided risky side-effects often associated with open-heart surgery.

She was out of bed the day after the procedure and back home in Truro shortly after to celebrate not only Christmas, but her son’s 13th birthday.

“I feel so blessed,” says the 32-year-old mother. “I am so grateful to all the healthcare professionals. The care I have received has just been amazing.”

“Medicine and surgery are continuously evolving,” says Dr. Aliter. “The new IR suites have the latest technology and offer a large space, allowing us to work comfortably with a large team and additional equipment, like a heart-lung machine.”

In early December 2020, a specialized team of about 15 people, including cardiac surgery, interventional radiology, cardiac anesthesia and cardiovascular perfusion, inserted a thin tube into Ceilidh’s heart, via the vein in her neck, to perform the procedure.

Working inside one of the new IR suites at the QEII, funded in part by QEII Foundation donors, the team used X-ray and ultrasound guidance to access the valve on the right side of her heart and remove dangerous bacteria causing the concern.

“She avoided open-heart surgery and avoided having to get a new artificial heart valve,” says Dr. Rob Berry, head of interventional radiology at the QEII. “It was a great example of multiple teams working together.”

The minimally invasive two-hour procedure done on Ceilidh was a success and couldn’t have happened without the expertise and co-operation of several specialties.

Roger Stanzel, a cardiovascular perfusionist at the QEII, is used to playing a vital role during heart surgery. His job is to operate the cardiopulmonary bypass machine — taking over the heart and lung functions of the patient and ultimately keeping them alive throughout cardiac surgery.

For the procedure on Ceilidh’s heart, two small incisions were made and a fine tube inserted into her body, creating a bypass circuit. The cardiac anesthesia team performed a continuous cardiac ultrasound, giving the rest of the team live images of the heart. This allowed the IR team to guide the AngioVac suction tube to the infection on the heart valve.

Using suction, the team cleaned the bacteria off of Ceilidh’s heart valve, capturing it in a filter trap for analysis at the pathology lab. Ceilidh’s own filtered blood was then sent back into her body through the bypass circuit.

“During this procedure, the patient has absolutely no blood loss, which reduces the need for blood transfusions and the associated risks of transfusion,” says Roger.

For Ceilidh, the procedure marked what she hopes will be the end of a long, painful journey and the beginning of a new stage in her life.

“I’ve struggled with addiction most of my life,” says Ceilidh, who started using drugs when she was 13 years old and has struggled with her mental health and trauma much of her life.

Injecting cocaine into her body led to an infection. Doctors know that endocarditis is usually caused by an infection. Bacteria, fungi or other germs from another part of the body spread through the bloodstream and attach to damaged parts of the heart. If it can’t be treated by medication, like in Ceilidh’s case, surgery is necessary.

“I count myself very, very lucky,” she says. “It is a miracle I was able to get this type of procedure.”

Ceilidh’s story isn’t uncommon. Five years ago, it was rare to see a tricuspid valve infection, says Dr. Stewart. Now, cardiac surgeons at the QEII do as many as 10 surgeries a year, mostly on young people who are intravenous drug users.

Dr. Stewart and Dr. Aliter expect the AngioVac procedure will be helpful to more people in the future.

“It means that more Nova Scotians who are candidates for minimally invasive procedures will have the opportunity to be treated with the newest techniques,” says Dr. Aliter.

After entering an opioid dependency program, Ceilidh has been sober for several months.

“I am creating a new life,” she says.