“The way of the future”: Robot-assisted surgery now treating patients with gynecologic cancers, here at home 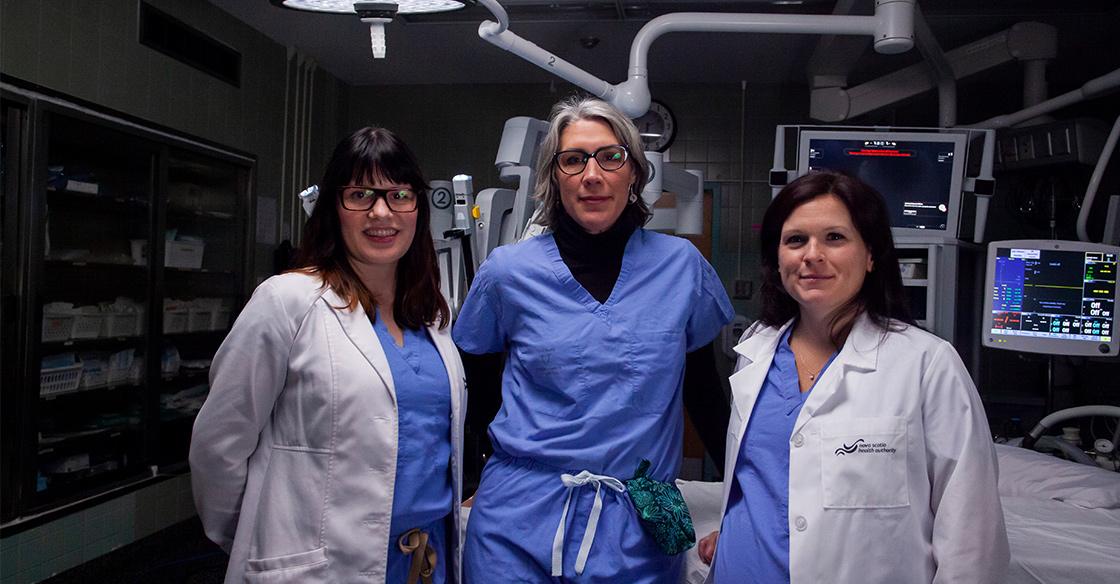 Maureen Gauthier moved to Nova Scotia from Toronto when she was 50 years old after a successful career in art restoration. Now a 71-year-old cancer survivor, Maureen continues to fill her life in retirement with creative hobbies and projects – her biggest being downsizing her 200-year-old home in Digby where she lives independently with her cats.

Reflecting back, Maureen describes her cancer journey as “a non-event”, a blip in time. This sentiment is largely attributed to Maureen’s experience with robot-assisted surgery at the QEII Health Sciences Centre.

Maureen went in to see her doctor about a pain in her groin area and was referred to a gynecologist. She went on to have a bioposy which resulted in a diagnosis of endometrial (uterine) cancer. After her diagnosis, she met Dr. Stephanie Scott, gynecologic oncologist and cancer surgeon at the QEII Health Sciences Centre to discuss treatment options.

Dr. Scott is part of a surgical team at the QEII that specializes in robot-assisted surgery – a new program that is possible because of QEII Foundation donors. She explained that Maureen would be a candidate for robot-assisted surgery and they discussed the many benefits of this new type of treatment. Robot-assisted surgery offers a minimally invasive way to treat cancer - giving patients with a range of cancers shorter hospital stays, less pain and quicker recovery times.

“It became clear that this was the way of the future, so I said yes”, says Maureen.

Maureen had her cancer treated robotically in September 2019 and the results have been phenomenal. Maureen spent only one day in the hospital and one day at The Lodge That Gives before she returned home. She was back to her regular activities and using the stairs in her home within weeks and has “almost nothing” for a scar.

“When I hear about what other women have had to go through in having a hysterectomy – this was nothing. This was so quick, it was remarkable,” says Maureen. “I think of women who have busy lifestyles, taking care of families and working – something like this just puts you on your feet faster so that you can continue with life. It was amazing – just amazing. I cant say enough good things about it.”

The QEII’s Division of Gynecology Oncology has come together to make a significant donation in support of the QEII Foundation’s Surgical Robotics campaign - a testament to their commitment to this program. Two members of this generous team, Dr. Stephanie Scott and Dr. Karla Willows, are a part of the powerhouse surgical robotics team who work with the robot and see the outcomes that are possible because of this technology every day. The QEII Foundation's campaign has just over $275,000 left to raise of its $8.1 million fundraising goal.

Maureen thanks her care team at the QEII and the donors who have made this state-of-the-art technology available in Atlantic Canada. “We don’t want people staying in hospitals any longer than they need to, especially now, people can recover better at home. The sooner we can get people home and up and about, the better. I knew I could trust Dr. Scott and I’m so glad I was able to take advantage of this new technology,” says Maureen.

You can help secure this technology for patients like Maureen and learn more about surgical robotics at QE2Robotics.ca.