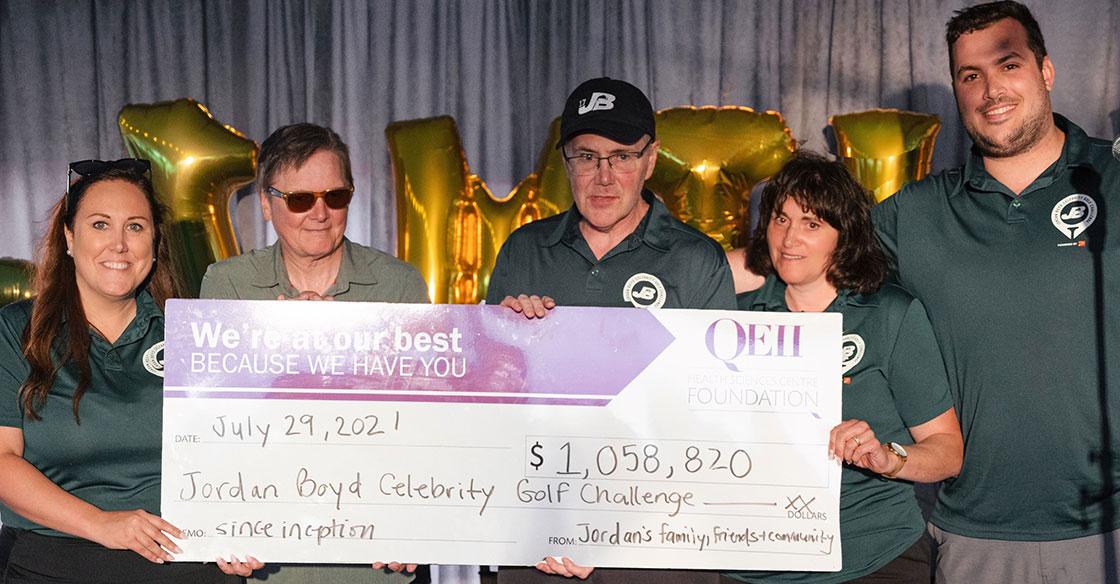 Last week marked an incredible milestone for the Boyd family and the QEII Foundation as they officially surpassed more than $1-million raised to-date in honour of Jordan Boyd.

The Boyd family and the QEII Foundation marked the moment this past Thursday (July 29) during the first-ever Jordan Boyd Celebrity Golf Challenge powered by CIBC; a day on the green that included 144 golfers, glorious sunshine, and a special hole dedicated to the late 16-year-old hockey player.

Over the years, Jordan’s name has become synonymous with impact – not just within the tight-knit Bedford community from which he was raised or among the many friends, families and fellow hockey players he met playing the game he loved.

Jordan’s story and the national movement established in his memory has helped keep the hockey player’s legacy alive, all while improving the lives of those facing inherited heart disease in our region.

In 2013, while attending the hockey training camp of the Acadie-Bathurst Titan, Jordan’s life came to an unexpected end after he collapsed on the ice. It was later determined that Jordan had an undiagnosed, inherited heart condition called Arrhythmogenic Right Ventricular Cardiomyopathy (ARVC). He was 16 years old.

Ever since, Jordan’s family have made it their personal mission to help prevent sudden death from cardiac arrest – whether by raising awareness of genetic heart conditions, funding AED access, or fueling vital heart health research at the QEII’s Inherited Heart Disease Clinic.

The family and the QEII Foundation have raised $1,058,080 (net) since 2014; a testament to their unwavering commitment to raising funds and awareness in Jordan’s honour.

QEII cardiologist, Dr. Martin Gardner, has seen this impact firsthand. He’s the founder and director of the QEII’s Inherited Heart Disease Clinic, which is one of the proud beneficiaries of the family’s generosity.

The QEII clinic – which was the first of its kind in Canada – leads the country in the diagnosis, treatment and research of those living with known, or suspected, genetic cardiac conditions.

For Dr. Gardner, it’s a research need that cannot be understated: Nova Scotia currently has the second highest incidence of ARVC – the condition Jordan was living with – in Canada.

“The funds raised by the Boyds and the community that stands behind them are having a direct and immediate impact on inherited heart disease research and care,” says Dr. Gardner. “Jordan’s legacy is truly moving the needle forward in this area.”

From centre ice to the green, the Boyd family has inspired us all with their passion and dedication – not only ensuring that Jordan is remembered for the remarkable young man and athlete he was but for all the good now done in his name.

For Jordan's older brother, Greg Dobson, it's a feeling that's hard to describe: “It’s amazing to see how the community has come together to support us in this journey and to see how Jordan’s story has been able to raise awareness and funds for critical and life-saving inherited heart disease research."

"We are so in awe of the support we continue to receive year after year and are so grateful to be able to keep Jordan’s legacy alive through these initiatives," says Greg.

On behalf of the QEII Foundation and all those touched by inherited heart disease in our region, thank you, Boyd family, and congratulations on this incredible milestone.

About Jordan Boyd
From the time he was old enough to look out a window, Jordan would watch in awe at his older brother and the neighborhood kids playing street hockey. He couldn’t wait to play the game. In fact, as a toddler first learning to walk, Jordan found a cut-off hockey stick and ran around the house with it – whacking everything in sight. At three years old, Jordan was already on skates and a lifelong love and talent for hockey immediately followed.

Not only was Jordan a talented hockey player, he was a kind-hearted individual who believed in giving back to the community. For such a young man, he demonstrated selflessness and compassion on and off the ice.