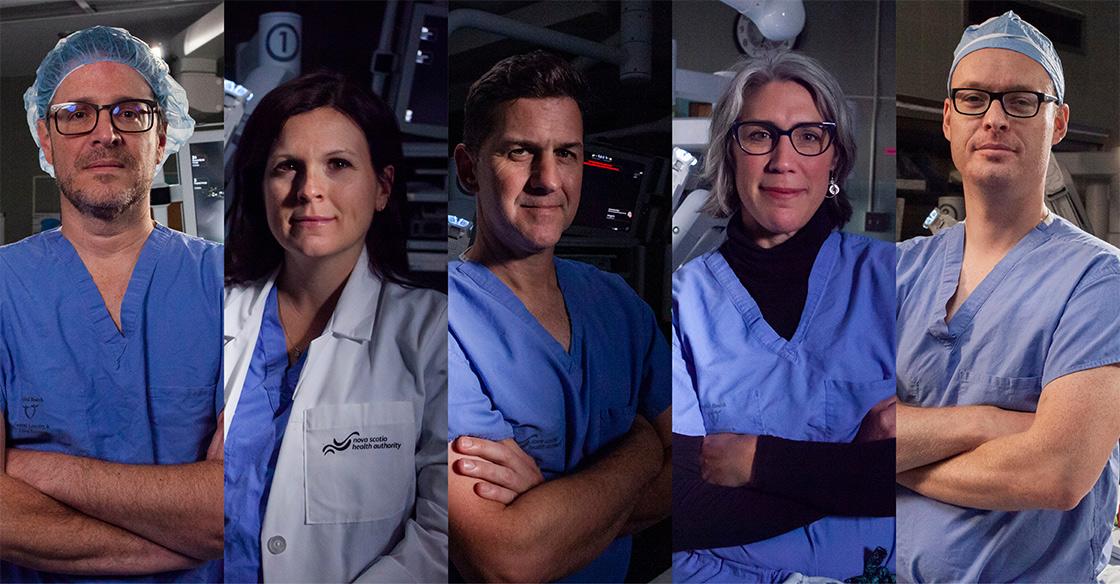 The QEII Foundation’s surgical robotics campaign has inspired many people to donate. This could be because of people’s general fascination around the futuristic technology — maybe they picture R2D2 in space — or the incredible benefits it offers to those facing a cancer diagnosis in our region.

A wide array of QEII Foundation supporters — including the general public and Ride for Cancer powered by BMO Bank of Montreal participants — banded together to support this $8.1 million initiative. Another group has also backed this campaign, as they believe this technology is key to delivering the best patient care at the QEII Health Sciences Centre.

This group that deserves special recognition includes the many doctors who made personal donations in support of the campaign. These are surgeons like urologic oncologist Dr. Ross Mason, who was recruited to work at the QEII thanks to its robotics program.

“I believe in robotics to my core,” he says. “It’s important for all of us not just to use this technology, but also show our support for it.”

At the end of the day, Dr. Mason says this campaign is about ensuring the best care possible for QEII patients. It’s a sentiment shared by QEII surgical robotics development council co-chair, urology department head and fellow donor Dr. Greg Bailly, who says doctors must support the system they work in.

“We, as frontline participants in the healthcare system, must contribute and commit both our energy, resources and our contributions to making health care better,” he says.

It’s also about more than professional beliefs for Dr. Bailly, as he says he and his fellow QEII doctors are also part of the wider Atlantic Canada community that stand to benefit from this groundbreaking technology.

“Our support sends the message that this is important to us as people, not just physicians. We too have friends and families facing these diagnoses,” he says.

As the technology has been used in treating patients living with kidney, prostate, gynecologic and ear, nose and throat (ENT) cancers, many surgical oncologists have donated to support the campaign. This includes many members of the QEII’s urology and gynecologic oncology teams.

Like Dr. Mason, QEII gynecologic oncology department head Dr. Katharina Kieser says she donated because she believes in the technology and in its incredible impact on patient outcomes, particularly for a group of female patients who previously, due to various patient factors, could not have minimally-invasive procedures.

“I think the population the robot serves in particular is a unique population and a curable population,” she says. “They deserve to have this treatment.”

Urological oncologist Dr. Ricardo Rendon says that for him, supporting surgical robotics also comes down to how it benefits the patient community. It’s a group that he says includes himself and other doctors, who someday could also stand to benefit from surgical robotics as patients.

“It’s a community effort and I’m part of this community, I’m as invested in this as patients and our community donors are. This demonstrates that I’m in the game too,” he says.

QEII Foundation president and CEO Susan Mullin says seeing donations come in from QEII physicians and healthcare teams in support of the Foundation’s surgical robotics campaign has been remarkable.

“When you have teams giving back to enable this technology to come to the QEII, it shows the degree of commitment they have to their patients and how much they believe in the impact of this equipment,” she says.

Mullin says that when people see doctors personally supporting a new, innovative technology like surgical robotics — an area they might not understand — it helps them feel confident that this is a technology that will benefit them, and others, at the QEII.

“When people see our healthcare leaders at the table investing, it gives them a sense of confidence and credibility. That means something to people,” she says.