‘I had lost touch with reality’: Brain surgery restores clarity and light to Dartmouth woman

The QEII's Dr. Sean Barry and members of the neurosurgery team were excited to learn patient Shelagh Rawding donated $3,000 in honour of the care she received.

Shelagh Rawding won’t soon forget the morning she slipped and fell on black ice outside a Dartmouth McDonald’s, on her way to work in February 2020.

The 66-year-old, who is a guest experience leader at the restaurant, felt a bump form immediately. As a precaution, she headed to Dartmouth General Hospital to rule out a concussion.

She received a CT scan upon arrival.

“When I was put through the scanner a second time, I was suspicious,” she says. “I knew something was wrong when the doctor entered the room. He was very subdued.”

Shelagh learned she had a brain tumour – one she had likely been living with for some time.

“I went very quiet,” she says, “After I left and was on the bus home, I shed a few tears.”

After a family doctor visit and an MRI, Shelagh met Dr. Sean Barry in August. A neurosurgeon at the QEII Health Sciences Centre, Dr. Barry reviewed her results and would later become her surgeon.

“He assured me that it wasn’t cancerous and that it had been there a long, long time – the slow-growing kind of tumour you can live with for years,” she says.

Dr. Barry explained that these tumours, known as meningiomas, aren’t typically dangerous. Only a small percentage of patients with meningiomas require surgery. They decided together that Shelagh would be monitored but hold off on surgery as she wasn’t experiencing symptoms.

But in February 2021, something changed. “It felt as though the tumour was moving in my head,” she says. “It was weird and scary.”

Checking in with her family doctor, Shelagh had another MRI in March, and was reconnected to Dr. Barry for a follow-up.

But something abnormal happened while awaiting the results. “I was not myself anymore,” Shelagh says. “I call it the dark zone – I lost touch with reality and was acting very strange.”

Shelagh’s son, William, who lives with her, was very worried, and began to fear for her safety. He accompanied her to the closest emergency room. 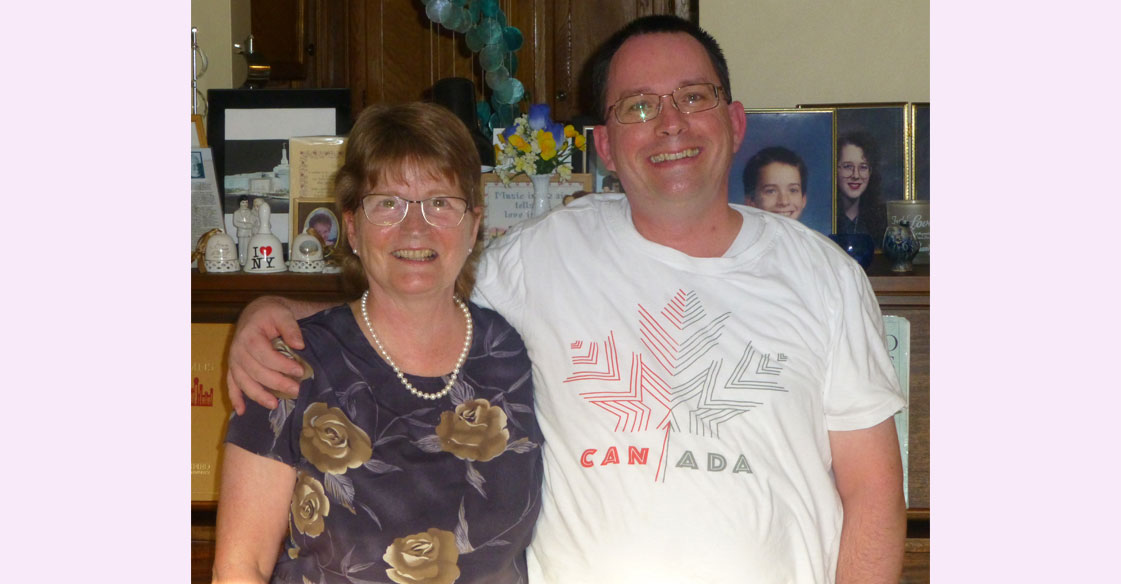 “The doctors thought the issue might be psychiatric, but William was there with me, advocating for me and explaining the situation,” she says.

Shelagh was transferred to the Halifax Infirmary building at the QEII, where Dr. Barry would perform her surgery.

“Initially, we were surprised Shelagh wasn’t symptomatic, because of the size of the tumour. If we can avoid surgery, we always do, but this tumour was, by the time we removed it, the size of an orange,” Dr. Barry says.

Over the course of the year Shelagh had developed speech difficulties, as the tumour was sitting on the part of the brain that controls language.

As the tumour progressed, she experienced severe anxiety, delusions, and was becoming paranoid.

“It is becoming more appreciated and understood that these type of tumors, when they do affect certain regions of the brain, can elicit psychiatric symptoms that patients didn't ever have before. In some cases, they can also exacerbate pre-existing psychological or psychiatric problems,” says Dr. Barry.

When Shelagh started to heal and feel herself again, she worried about her interactions with hospital staff when she hadn’t been well.

“I went to apologize to them and they said ‘Don't apologize. We love you.’ I'm here to tell you, the staff at the QEII are fantastic,” she says. “They treated me professionally and were kind, caring, and compassionate, speaking to me quietly when I wasn’t myself.”

She recalls feeling taken care of every step of the way – during what she calls a wild ride of paranoia, fear, and upset.

“That’s where I got the idea for the donation,” Shelagh says. “I wanted to give back. Dr. Barry and the entire team – they saved my life. And my son, standing up for me. It saved my life.”

Shelagh made a generous donation of $3,000 to the QEII Foundation, directing her gift to the neurosurgical unit to help future patients.

When Dr. Barry learned of her gift, he was honoured. "It's so rewarding," he says, "It's a gesture of appreciation for the entire team."

“It means a lot to us. It's wonderful to have money donated. It's a reminder that patients are appreciative of what we do.”
– Dr. Sean Barry

Today, Shelagh feels like her old self again, and has just returned to work – a job she loves. She couldn’t be happier to be back on her feet and she’ll never forget the team at the QEII.

“We'll monitor Shelagh over the course of her lifetime, but I'm very hopeful that this is the only brain surgery she'll ever need,” says Dr. Barry.

In many cases, hundreds of QEII professionals touch an individual patient journey at the QEII Health Sciences Centre. Shelagh’s care involved the teams in Emergency, Neurosurgery and the ICU. These professionals include paramedics, nurses, residents, doctors, surgeons and support staff.

Shelagh recovered from surgery in the donor-funded neurosurgical intermediate care unit (IMCU), which opened to patients in early 2017. Part of a $2.5-million initiative, the new unit has greater capacity – adding two additional beds, and is dramatically impacting outcomes, with 50 per cent more brain and spinal surgeries taking place at the QEII as a result of the campaign.

The updated IMCU also provides more privacy for patients. Those who’ve experienced brain surgery recover faster in a quiet, isolated environment with minimal distractions. Private rooms also make it easier for family members to spend time at the bedside of loved ones.

A community of donors, like Shelagh, are changing health care through the QEII Health Sciences Centre.