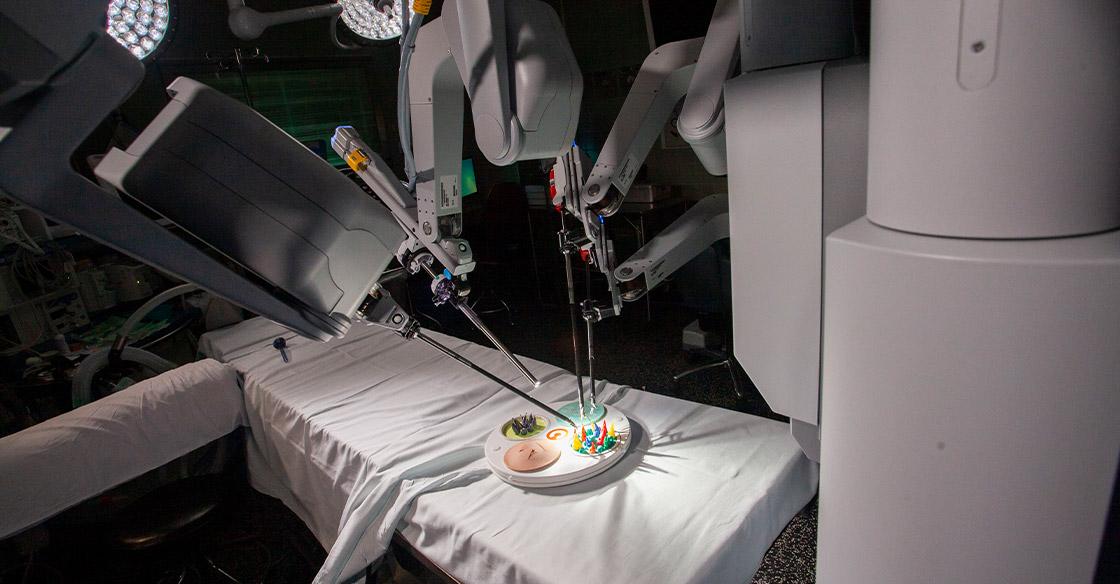 The da Vinci Surgical Robot is being used as part of a pilot project. Surgeons say it's safe to use in the pandemic because there's significantly less contact with a patient. (QEII Foundation)

Warren Connors works with robots every day at work, but he never imagined his life would be saved by one.

Connors was diagnosed with cancer in November. He went to the emergency department at the QEII hospital in Halifax thinking he had kidney stones. Instead, they found tumours on both his kidneys.

"Friday night, I was indestructible and that Saturday morning, it was 'Oh my God, am I going to die?'" he said of the shock of the news.

His urologic oncologist told him he was going to try an innovative way to remove the cancer: by using Atlantic Canada's first surgical robot to cut it out.

By day, Connors leads a robotics team that scours the sea floor for explosives. He said the irony wasn't lost on him that similar technology would be used in his surgery.

"It's this big robot with multiple arms and it's making noise and it's moving," he said. "They don't look like a friendly nurse smiling at you as you're falling asleep."

Connors's surgeon, Dr. Ricardo Rendon, said he's seen all types of reactions from patients who learn they'll be part of a pilot program at the QEII to test the robot surgery system.

While an assistant sits with the patient, Rendon stays in a control room, controlling the robot that performs the procedure.

The robot provides magnified images to the surgeon who can then be more precise, and perform more complex procedures.

"There are many tools out there that are a slight improvement, but this particular tool is an amazing improvement for the benefit of the patients," Rendon said.

'Such a precise job,' says patient

Connors has now had two robot surgeries. He recovered quickly from the first operation. Both his tumours were cut out in just six weeks. His prognosis is now good.

"The cool thing was that by using robotics, they were able to do such a precise job that I was able to save some of my left kidney, which was a big deal because I'm only 43."

The da Vinci Robot was used for the first robot-assisted surgery in Halifax in February 2019. Little did the hospital realize just how valuable the timing would be, said Rendon.

When the COVID-19 pandemic hit the province, all but life-saving and time sensitive cancer surgery procedures were cancelled. Just one month after the shutdown, teams got the all-clear to resume robot-assisted surgeries for cancer treatment.

"One of the advantages is that the length of the stay is shorter," said Rendon. "The patients get to go home a lot faster, so it cuts back the time of exposure of the patient to hospital or nursing staff."

da Vinci not a permanent QEII resident just yet

Rendon said the robot could help allow surgeries to continue if the province faces a second wave of the coronavirus or shuts down, but the da Vinci Robot still isn't a permanent fixture in the QEII.

It's currently on loan from the company that made it as a pilot project. The QEII Foundation has raised $7.1 million to bring it to Halifax and train staff. It needs another million dollars to make sure it stays.

Rendon is making the pitch, hoping more people will see that the upfront costs are worth the investment, because faster recoveries will free up much-needed hospital beds.

Rendon said five surgeons in urologic oncology and gynecologic oncology have been regularly using the machine. They've performed more than 200 procedures since it arrived. Now, it's piquing the interest of other departments.

"It is a new program. We are making sure that it is successful," he said. "Eventually, we will need a second robot."

To learn more about the QEII Foundation's campaign for surgical robotics and how you can support, visit QE2Robotics.ca.