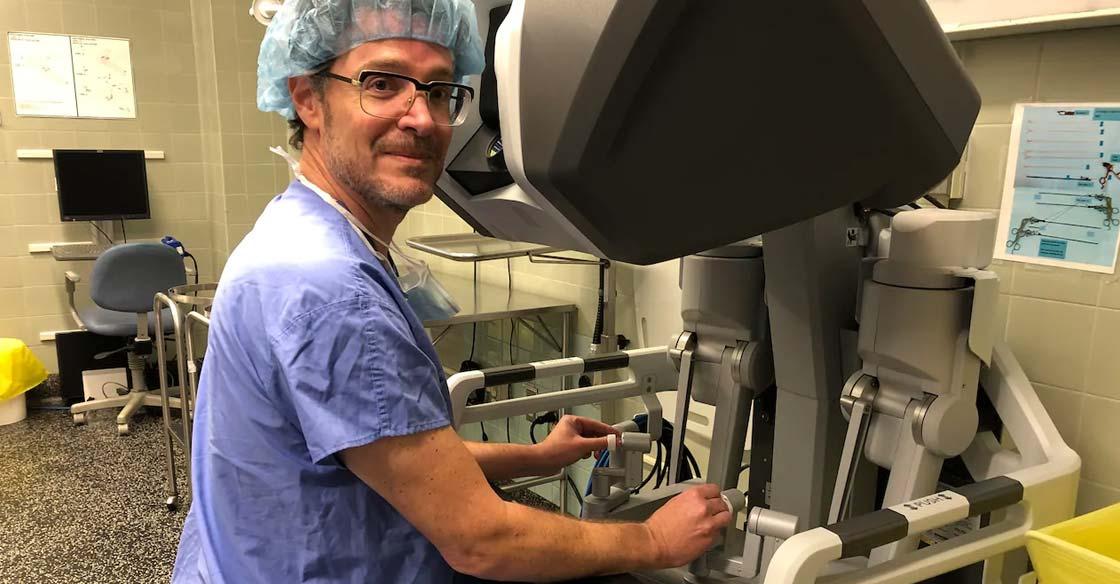 Dr. Ricardo Rendon now performs most of his operations using a surgical robot. He operates it from a nearby console, with his back to the patient. (Carolyn Ray/CBC)

The hands of a surgeon are: sacrosanct, agile, caring, precise. This week on Atlantic Voice, Carolyn Ray challenges those ideas with a story about a surgeon in Halifax who sits back on to his patients and operates using a four armed robot. 26:10

When Agnes Rendell found out a robot would be used in her life-saving surgeries, she couldn't wrap her head around it.

"You have a vision of this R2-D2 coming in and doing surgery," she said. "It was just crazy to me."

Rendell is celebrating eight months later as it appears the robot pilot program will become a permanent addition to the QEII Hospital in Halifax. That follows a significant donation from The Joyce Family Foundation.

Rendell was shocked to learn she had two tumours, one on each kidney, during a routine checkup earlier in the year.

She was told she needed two major surgeries immediately, but they would be done using the hospital's new surgical robot, DaVinci.

"It's amazing today," said Rendell. "If I didn't have the scars … I don't think I would know I had surgery."

Surgeons in Halifax have advocated for a surgical robot for years as their counterparts in bigger cities received them.

But the massive price tag proved to be a major hurdle. DaVinci, for example, costs $8.1 million for equipment and training.

But for Dr. Ricardo Rendon, a urolologic oncologist, DaVinci was a valuable investment that could take his work in an entirely new direction.

The robot has four arms, each with an attachment to help with a procedure. It's controlled by a surgeon in a console a few feet away from the patient.

Rendon said it took a while to be comfortable working with his back to his patients.

"Now, I'd actually rather be here than be there because I'm able to do more and better things here than actually standing beside the patient."

Rendon said the machine can move in ways a hand can't, so physicians can take on more complex surgeries. DaVinci is also precise, leading to faster recovery times.

"For kidney cancer, before it was four or five days, now we keep them for one or two days," Rendon said.

A few years ago, Rendon took those arguments to the QEII Hospital Foundation and convinced the team to launch one of its biggest fundraising campaigns.

The foundation collected big and small donations from the community. Last year, it raised enough to borrow the robot and launch a pilot program. It is the first of its kind in Atlantic Canada.

Little did the surgical team realize how valuable it would be when the pandemic reached the region a few months later.

While hospitals stopped nearly all services, surgeries using the robot were able to start up again within weeks because the physicians could distance from their patients.

The shorter hospital stays were another benefit.

"We're decreasing the number of days they can be exposed to people who potentially have COVID, and we're keeping our beds available for other situations," said Rendon.

While Rendon was adapting to a new way of work, the financial aspect of the program was leaving the team in limbo, wondering if they'd be able to buy the robot outright.

But a new donation from The Joyce Family Foundation has the QEII Foundation's giant goal in reach. The charity wrote a cheque for $1 million.

There's now just a $350,000 gap to fill to make DaVinci a permanent resident of Halifax.

That's great news for Rendell, who is now speaking out as much as she can to help people understand what it can do.

"I'm still marvelled at it. I just don't have the words all the time because I just can't believe how fast everything healed up."

Seven weeks after her second surgery, she was back on the golf course, swinging the club better than ever.

"We always say DaVinci made me a better golfer. I think it's a he! He's my hero.

"It's my favourite robot," she laughed.