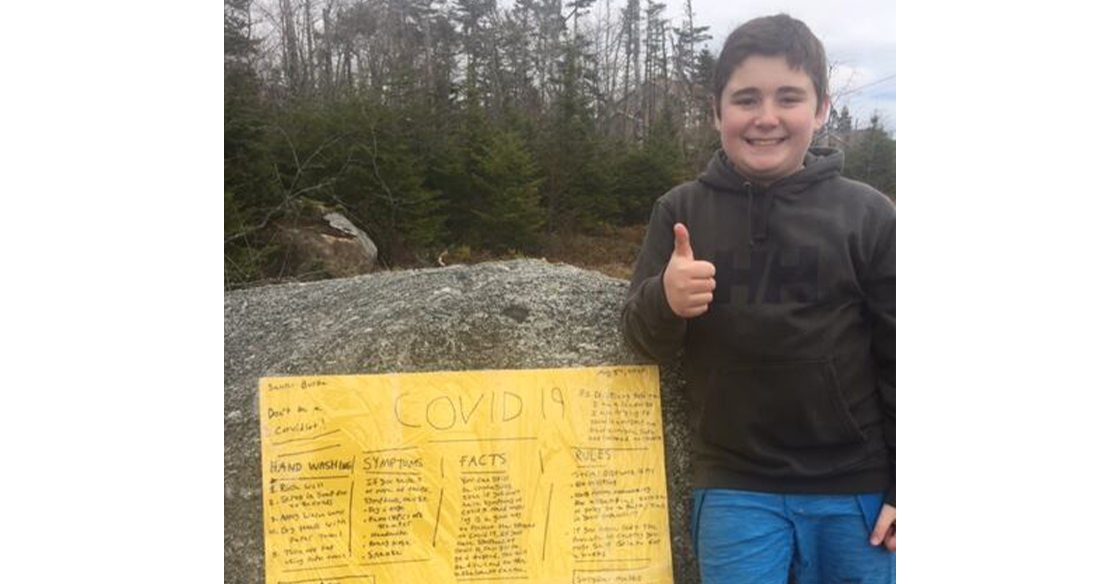 Sawyer Burke made a sign to inform people about COVID-19. He tries to keep his friends up to date, but says many aren't interested in the pandemic. (QEII Foundation)

Sawyer Burke is typically interested in history, but he's been fascinated by the present for the past two months.

The 11–year–old from Hatchet Lake, N.S., is trying to learn everything he can about COVID–19. That includes tuning in to Nova Scotia's COVID-19 briefings.

"I found out that globally we had a shortage of [N95 masks] and gloves," Burke said.

Inspired by Premier Stephen McNeil and Dr. Robert Strang, the province's chief medical officer of health, he decided to take the $20 in his wallet and donate it to the QEII Foundation's COVID–19 fund.

'I knew that I could lend a hand'

"I knew that I could lend a hand by donating some money to give them some extra equipment," he said.

Burke is one of at least 10 children to donate to the foundation in the last few weeks.

Jessica Campbell of the QEII Foundation said kids out of school have started using their free time to raise money for the hospital.

Some have given their allowance, another donated birthday money.

"I've heard stories of kids who are doing things for their neighbours like weeding gardens and mowing lawns in exchange for donations," Campbell said.

In Porters Lake, Abby, Noah and Sully Horne have been spending a lot of their free time on their trampoline. A few weeks ago, 10-year-old Abby challenged her younger brothers to see who could stay on the trampoline the longest.

"We just decided to stay on a trampoline because it's smaller than a house," she said. "If we can manage to stay on there for a while, then we'll be able to survive staying with each other."

Their mom thought they'd only last a few minutes, but the kids stayed outside for seven hours.

As the day went on, neighbours started pledging donations to keep them motivated.

"I felt proud," said eight-year-old Noah. "At first, I didn't think we were going to donate any money."

Abby said they all agreed the hospital should get the money.

"The doctors and nurses, every day, even though they're scared, they have to go out there knowing that there's a big possibility they'll catch the virus," she said.

For Burke, his fascination with the pandemic has connected him with new friends.

He decided to email McNeil and Strang to let them know that he was following their advice. They are now pen pals.

Burke sent Strang one of his hockey cards. Strang gave him a shout-out during a provincial briefing.

"Like my mouth was open, I was about to cry," said Burke. "I was that happy."

After Burke received the recognition for his hospital donation, others started chipping in. They gave his mother money to donate on their behalf.

Burke said he's just doing what he can to keep people up to date about the virus.

He said most of his friends aren't too interested in COVID–19. But that doesn't stop him.

"I always think I should try my best to try and inform them to make sure they know what they can and can't do," he said.

When asked what advice he offers his friends, Burke takes a page from McNeil's book: "Stay the blazes home."