The J&W Murphy Foundation donated $3 million to the QEII Foundation to create the position after the Murphy family lost three members over a short period of time and saw a need for research on the subject. Macdonald will be working with Dalhousie University, Nova Scotia Health, and the QEII Health Sciences Centre to study palliative care in the province.

She spoke with Mainstreet guest host Carolyn Ray about the new position and what she wants to do in the role. Their conversation has been edited for length and clarity.

Tell us more about the new role. Where do you begin?

I wish I knew. I began just being incredibly excited and feeling incredibly blessed to be able to come back to Nova Scotia. I'm a researcher, clearly, and I've done a lot of work in palliative care research but this is a new opportunity for me to actually come to Nova Scotia, where I'm originally from, and think about how I can work with Nova Scotians to imagine how palliative could be even better in the province.

What's your ultimate goal in this role?

So at this point, I don't know what all the interesting questions are. I don't know what Nova Scotians want. I have lots of ideas but I don't want to impose them on citizens, on everyday people in the province.

Where I start is by asking people to talk to me, to tell me what they're thinking. Where do they think things are working really well already in the province? Like hospices, there are a number of new hospices and hospice organizations that would like to build even more hospices in the province, so that's one going to be one area where I know things are working really well and they could be even better so that would be one path I would follow.

But there are also palliative care units in hospitals, they're also working really well. How could they be even better? So I kind of approach it as hoping to spread what's working well already and make more of that, operationalize that for more Nova Scotians.

Do you want to speak with families who have experienced having loved ones in palliative care?

Absolutely. I'm a social scientist. I'm trained as an anthropologist. I have to talk to people. I love talking to people. We call it research data but that's all data to answer the bigger level questions about how palliative care can and should look in the province.

Why is palliative care so important to you?

Palliative care is death, dying and bereavement. So that is going to touch all of us, if we like it or not. We often like to think almost like we're not mortal. We're all mortal. We all will die. And I have had my own personal losses. I have watched family members who have had that horrible cancer diagnosis and then live out their final days in hospitals.

It's hard. It's hard but it doesn't have to be terrible. With the right palliative care and the right support there can be a lot of beauty at end of life and so that's really what draws me to palliative care. There's so much beauty that can happen as people are sick and dying and it's really important to also seize that on top of all of that other stuff that happens.

Did your personal experience in supporting family members change your perspective of palliative care?

As I said, palliative care is about death, dying and bereavement. It's about grief support and these families really needed support in their communities but the communities weren't necessarily oriented on how to help and support those families so that really opened my eyes to the potential of palliative care to be more embedded in community living. It's a philosophy. It's a way to live in community and support your neighbour who's just gone through something that was tremendously horrible.

Would you like families to reach out to you directly right now or would you like to give it time as you establish your feet in this position?

I guess I could say a little bit of both. Yes, I need to go slow a little bit but I'm always interested in hearing about families because that then inspires the directions that I take. Just the other day, someone in my community in northern Nova Scotia was talking about how they were with an aunt of theirs, sitting at the bedside and … the person at the bedside needed a meal and there was nobody to feed her so she had to leave the bedside to go get some food and when she left, the person died.

Something like that, that's a really important story. It's a small, small detail but that's an important piece of information because that's a missed opportunity. I'm always interested in hearing the good stories and the stories where there's a moral of the story that says this could've been better. 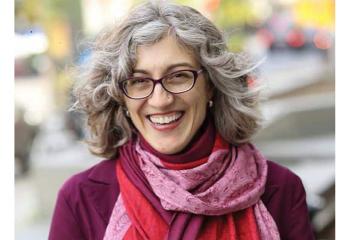