CBC News: This Halifax artist is using his paintings to give back

In 2004, Colin Chen was awarded the national title of Outstanding Artist of Chinese Modern Folk Painting by the National Ministry of Culture in China. (Photo credit: Brian MacKay/CBC)

The QEII Health Sciences Centre Foundation is in the midst of a significant fundraising effort to raise $2.5 million for its new orthopedic surgical robot, and a Halifax artist has stepped up to the plate to help.

Colin Chen is auctioning off 52 of his paintings, with all proceeds going to the QEII orthopedic robotics program, as well as the QEII thyroid cancer fund and the Chester Art Centre.

Growing up in China, Chen never thought he would be an artist. A hairstylist by trade, he had no formal training in the arts. Instead, he learned by doing.

"I wanted to go to art school, but when I was growing up, my family was very poor," said Chen. "So I just learned by myself."

His paintings reflect the culture and scenes from his hometown in Zhejiang province on the East China Sea, as well as people, places and stories from Nova Scotia. 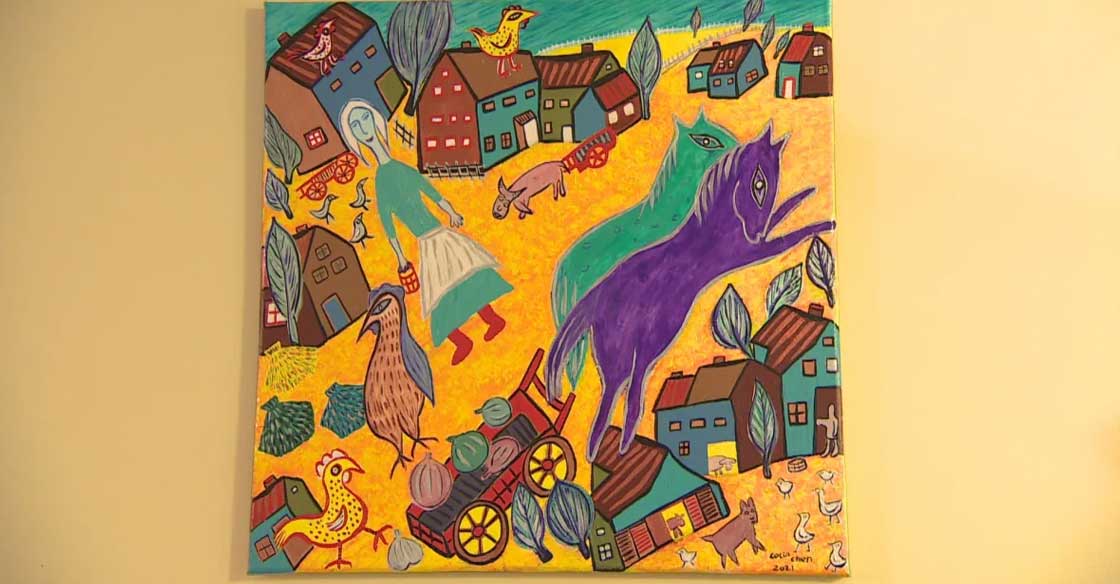 Two of his paintings have won national awards, but Chen said he follows no rules when he creates.

"This is a very free style; basically I paint whatever I have in my mind," Chen said through a translator. "Because I had never had any professional training, I'm not constrained."

He runs a hairstyling business out of his home, so he paints at night and on the weekends.

"Sometimes on a Sunday, when I'm not working, I can paint all day," he said. "It feels like a peace inside me. I really enjoy it."

Chen and his family immigrated to Canada in 2009. One night during their first winter, their car went off the road.

The family was not able to communicate in English, but that did not stop several passersby from trying to help.

"Those strangers who helped me in the snow when I got into trouble and into difficulty, that has touched me very much," he said.

This kindness inspired him to give back to the community, so he decided to auction off his paintings for the QEII foundation.

But building an auction website and planning an in-person event to sell the paintings was not easy, and many people stepped up to help make Chen's dream a reality.

"It's really been a number of volunteers who have come forward to say, 'Colin has this really beautiful idea and we want to help him set this off,'" said Amanda Hatt, the QEII Foundation's director of community programs.

One of the volunteers, Bill Bu, organized much of the event.

"This is coming together finally, after many days and nights," he said. "I think sometimes we worked until 1, 2 o'clock in the morning."

Out of the 52 paintings, four paintings have already sold to members of the Chinese community in the province.

Chen said he hopes his art can make anyone think of home, no matter where they're from.